The topic for The Session #141 is “The Future of Beer Blogging.” Because it comes with an announcement that it is time — past time, really — to recognize The Session has run its course (and maybe because when I tweeted a link to Jay Brooks’ post I used the words “sunset” – my bad) discussion popped up about if the demise of The Session is another sign that beer blogging is dead.

My family and I are in a time zone far, far west of most of you and there are rain forests and crashing waves to see, so I will be brief. Those of us who decided to call it The Session when it began in 2007 never claimed it was a stammtisch. It was of the digital world. We didn’t all sit down together, beers in hand, for several rounds. If a member went missing for a gathering or two we didn’t worry about her or his health. We didn’t bitch about our kids or the neighbor’s dog.

It served multiple purposes, I suppose, but one reason I suggested it at the outset was to expand the number of blogs that readers were paying attention to. One of the six regular visitors to Appellation Beer might drop in an see what was being written at Beer Haiku Daily (the host of the eighth session, and, like many early hosts, long gone). This might also be called listening to more voices.

Perhaps The Session could still serve that purpose, but for several years it has not.

So, to the “future of beer blogging.” I first typed, “I don’t care.” In fact, I do care, but my interest is the story. The delivery vehicle is just that. Have you ever listened to the town crier on a foggy morning in Lyme Regis? Great form of communication. Not so much today. Beer blogging will remain one way to engage readers/listeners/viewers going forward. As a fan of the written word, for now my preferred way. I’m excited that Jonathan Surratt has decided to drag RSBS (means nothing to you, right?) from the aughts into the teens and offer us ReadBeer. Call it diversity in beer storytelling.

And buy that man a cheeseburger.

What lives in the archives (thanks, Jay Brooks) of The Session is pretty terrific. Back in April of 2014 the topic was beer journalism. That’s what we should be talking about, and consider blogging as one outlet. Things about blogging have changed since 2007, but not that much. Blogs will continue to go and come. Mark Johnson nicely traced the life cycle a few weeks ago.

As to the future of Appellation Beer? Martyn Cornell put it better than I after the North American Guild of Beer Writers gave me what might be called a “lifetime achievement” award. Things have been quieter than quiet here, but I’ve been busy writing stories that have appeared or will appear elsewhere and on research for a couple of book projects. When I determine what regular posting means here then that will resume, and the about page will reflect the schedule.

I will likely miss The Session more than you. I didn’t make all of the 140 that came before this one, but more than most, including No. 140. How many were there for that one? What should that tell us? 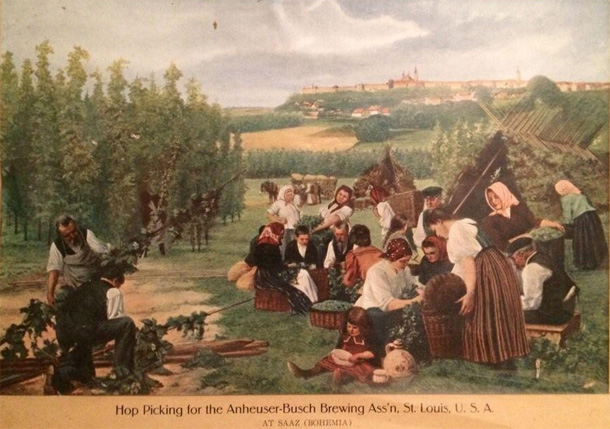 The topic for The Session #140 is Czech beer, but I’m going to write about Czech hops. The advertisement at the top may not be as old as it looks, but it suggests an unbroken link to the past.

A massive fire in the town of Žatek (Saaz in German) in 1768 destroyed historic documents that might provide more information about early cultivation, which apparently began in the first millennium. Few references to Bohemian hops exist before the fourteenth century, but from the time Charles IV actively promoted the product it flourished. In 1553 the Bohemian town of Plattau became the first outside of Spalt to receive its own hop seal, issued because dishonest merchants packaged inferior hops and sold them as “genuine Saaz.”

The original Saazer variety had, and still has, a red bine. It was called “Saazer Red” or “Asucha Red” to distinguish from the “Green Hop” that also grew in the area. In 1869 brewers paid 50 gulden per zentner for “Asuscha Red,” compared to 28 gulden per zentner for the “Green Hop.” More than a half century later, when hop breeding pioneer Karel Osvald began making clonal selections to improve the agronomic qualities of Saaz, he made it clear the hop would have evolved.

“Current hop cultures are a mix of vegetative posterity of various genetic origins. Issue of varieties is absolutely unclear, and we can talk neither of Czech old-Saaz red-bine hops nor of Semš hops. Semš hops originate from old-Auscha hops, which comes from old-Saaz hops,” he wrote. “Today the cultures of hops are thoroughly mixed, even though there are no great differences between neighboring plants in a hop yard. Hops are plants that can adapt to growing conditions, since the soil and the climate lend them a certain character.”

Alistair Reece has announced the topic for The Session #140 will be Pivo, or Czech beer — they are, after all, the same.

He writes, “In the autumn of 1999 I jumped on a bus at London’s Victoria Bus Station and spent the next 20 or so hours making my way across Europe to the mother of cities. The Czech Republic, most specifically Prague, would be my home for the next ten years, although my original plan had been just one year and then moving on to visit as many former Soviet countries as possible, best laid plans of mice and men, and all that jazz. I still remember my first Czech beer in situ, I’d had a couple of Czech lagers as a college student in Birmingham, a half litre of 10° Budvar in a little pizza place among the paneláky of ?erný Most. Beer was to be part and parcel of life for the duration of my stay in the country I still wistfully think of home. That my dear readers is the theme then for The Session this Friday, Czech beer.”

And he asks for, “a love song to Bohemia and her beers, the land that gave us the original pilsner, and so much more.”

My wish is that @evanrail and @beervana join The Session on Friday.

Host Jack Perdue has posted the roundup for The Session #137 – Good in Wood posts.

Perdue, himself, chose to focus on Goose Island Bourbon County Stout, the beer that launched seemingly a thousand brand extensions. He digs deeply into if it was the first of its kind, concluding, “Does it matter who crafted the first bourbon barrel-aged beer? No, not really, but it does make for interesting discussion. When I hear a thing that doesn’t sound exactly right, I want to know why. It’s unfinished business and it must be brought to some satisfying conclusion — at least in my mind.”

Host Jack Perdue has announced the theme for The Session #137 is “Good in Wood” and that the topic is “is deep and wide and meandering, romantic and historic, personal and professional.”

That’s pretty opened ended, but he has a few suggestions for those who crave more direction: