By Stan Hieronymus on December 7, 2018 in the session

Welcome to the 142nd, and best anybody can tell last, gathering of The Session. I am the host and because this is the last decided to call it “One more for the road” — but if you prefer “Last Beers” that is fine. Per usual, any suggestion from the host is strictly optional, but here is mine: Pick a beer for the end of a life, an end of a meal, an end of a day, an end of a relationship. So happy or sad, or something between. Write about the beer. Write about the aroma, the flavor, and write about what you feel when it is gone.

Fact is, since I wrote that, I’ve been thinking more about the road part of “one more for the road” than beer, and Butch Hancock started showing up on my playlists more than Frank Sinatra. I think the first time I heard “If You Were a Bluebird” Joe Ely was singing, although you might know the Emmylou Harris version better. A bit:

But as convincing as Jimmie Dale Gilmore (like Ely and Hancock a member of The Flatlanders) sounds explaining why he takes some credit for the song, it belongs to Hancock, who wrote it more than 40 years ago. Gilmore lays claim to the song because he says it come to Hancock in a dream in which Gilmore was singing it. Years after we heard Gilmore tell that story, I happened to end up standing next to Hancock while our children were hula hooping at a music festival. I asked him about Gilmore’s tail. Yes, he said, it came to him in a dream, but he was singing it himself. He sings the lead on “Thank God for the Road,” which he wrote in the aughts. Again a bit:

There’s the sky, here’s the earth
This is the road for all it’s worth
It’s a ribbon, it’s a river, it’s a wave
It’s an arrow and it’s a snake
It’s asleep and it’s awake
And it stretches from the cradle to the grave

Four years ago the topic for The Session was “Beer Travel.” Daria and I used to self-publish a newsletter called Beer Travelers that turned into a column for All About Beer. That was typically more about destinations, but the road is what got us there. For instance, this was first written for All About Beer in 2010 and repeated for Session #93. 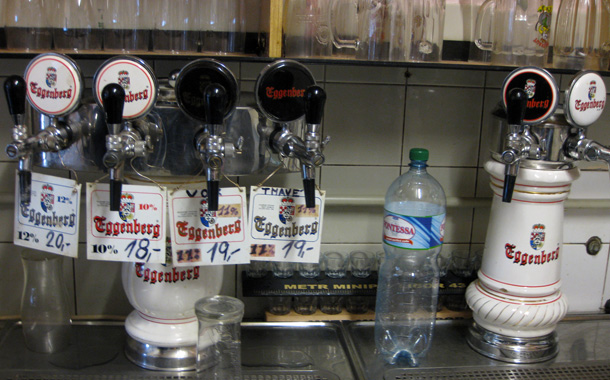 The day before touring Pilsner Urquell we visited the town of Ceský Krumlov, a UNESCO World Heritage site and second only after Prague in our list of places to see in the Czech Republic. A couple of months before a friend told us to be sure to tour Pivovar Eggneberg, but not until we’d been walking through the narrow cobblestone streets for several hours did we discover the only tour of the day had already gone.

Before settling in at the brewery’s restaurant, located above the lagering cellars as it turns out, for a late lunch we headed over to peak through a closed gate into the brewery yard. What might best be described as a snack shack sat not far from the entry. A man inside waved and signaled us to come around the back, where he held the door open.

Two men greeted us in Czech. They spoke no English. We speak no Czech. The man obviously in charge pointed toward the beer taps and made it clear there would be only one draft choice, because like the food menus on the wall the other tap handles were for busier days. The beer turned out to be a slightly cloudy unfiltered pale lager. A dark beer was available in bottles. We had one of each, sitting on a narrow bench in the storage room. We continued to speak English, smile and gesture. He spoke Czech, smiled and gestured. Occasionally the second man, wearing a leather cowboy hat, mumbled a few words (he apparently had been drinking a while and eventually wandered off).

We somehow discovered the first had Eggenberg T-shirts for sale (fortunately we’d be able to do laundry soon, because like everything else in the small shack the shirt smelled like the inside of an ashtray) and when it came time to pay he pointed to numbers on the menu to let us know how much we owed. The beers cost about $2 for two half liters, the T-shirt $3.

We had more beer with lunch, but it didn’t taste as good as in that shack, a place we never would have ended up had we planned more carefully.

Sometimes the best tour is the tour not taken.”

Pardon one more song lyric (this from James McMurtry):

The hurricane party’s windin’ down
and we’re all waitin’ for the end
And I don’t won’t another drink,
I only want that last one again

I’d be happy to have that Eggenberg beer as this party winds down, but it isn’t an option. Instead an old friend produced for the season seems like a good choice. We were happy the other day to spot Great Divide Hibernation on the store shelves. Almost missed it because now it is packaged in a colorful can. This is a beer we used to save a bottle or two of for the next year because it ages gracefully (and once medaled at the Great American Beer Festival in the “aged” category). It might cellar just as well in cans, but I don’t expect to find out.

Hibernation pours a reddish mahogany, with a thick tan head and web-like lacing. Put on the right Christmas music and you might think nuts were roasting somewhere hearby. There is abudant chocolate on the nose, caramel and dark fruit adding complexity. Christmas-cake rich in the mouth with all the flavor promised by the aroma. Slightly boozy, with a long finish, lingering like the road ahead disappearing into the horizon.

So that’s a wrap for The Session. There’s always another road waiting. Always more beer. I’ll get to the last drops of Hibernation after typing this sentence, listening to the Flatlanders and seeing how many shared roads I can identify.