By Stan Hieronymus on October 22, 2007 in beers of conviction 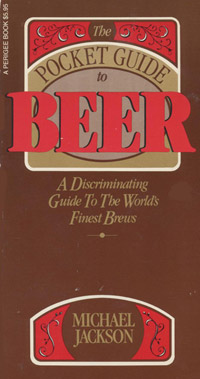 When somebody talks about “MJ’s list of best beers” do you think about the latest offering from Men’s Journal or one from Michael Jackson?

Working on another project I recently hauled out his first Pocket Guide to Beer, published in 1982 and opened enough times since that the 18 pages containing Guinness through Anchor keep falling out.

This was the only pocket guide where Jackson used a 5-star rating. In following editions the highest was 4. In essence, each 5-star beer in this edition was a best of breed, so Zum Uerige Altbier represents that style, Westmalle Tripel that one, etc. (More about this at the bottom.)

Just for fun, here are the 42 beers that Jackson awarded 5 stars. (He also gave all 12 traditional Lambic brewers in the Senne Valley 5 stars “for dedication to an elusive craft,” adding “their products vary according to the good years and the bad, a greater discrimination would be illogical.”)

In the introduction Jackson explained a beer rated 5 stars was “a world classic either because it has outstanding complexity and distinction or because it is the definitive example of its style, and no matter whether everyone is capable of appreciating it; some people probably don’t like first-growth Bordeaux, either.”

In later editions he introduced the star ratings by making it clear they compared beers within a region to each other. For this first one, he wrote, “The whole scale of ratings in the German section tends to be high because all beers in that country are of what must be recognized internationally as a particularly good quality.”

Government lies and other good beer reading
The best selling US beers, circa 2007