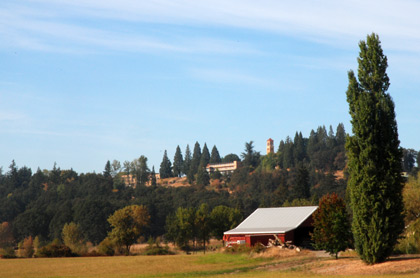 Friday, Jeff Alworth at Beervana posted the news that the monks at the Mount Angel Abbey plan to build a brewery on their hilltop that overlooks the town of Mount Angel and surrounding farmland, much of covered by hop plants this time of year. And Teri Fahrendorf commented:

I am very happy to hear this. I love visiting Mt Angel Abbey, especially in the spring when the stately chestnut trees are blooming. The flat abbey hilltop is a place of respite and peace. There’s a great bookstore, vespers brings you back to in time to the traditional spirit of medieval Europe, and there are benches to enjoy your picnic lunch while you gaze out across the hop fields. I began visiting when I was brewmaster at Steelhead in Eugene, and I always thought they should have a brewery there. I am very pleased the monks think so too.

That might be all we need to know right now.

Of course there’s going to be considerable chatter. And certainly skepticism, starting with the slogan “Taste and Believe.” Believe what? In the quality of the beer? In the spirit behind it? In the role the monks will play in the decision making process and eventually brewing? In a time that marketers have pretty much made words like “tradition” and “genuine” unusable is it enough for monks to explain they live by the rule of Saint Benedict? It was written about A.D. 530 and has a pretty good track record. It calls on monks to be self-sufficient through their own labor. It really is that simple. The brewery will be small, but it will be one more way the monastery sustains itself.

As Jeff wrote, the monks invited us to visit the monastery last September. Among other things we sat in on discussions about branding (more about the “swanky brand identity” at BeerPulse.com) and listened to members of the community discuss in all seriousness everything related to getting into the business of brewing.

I thought about this when I was reading the third installment in Evan Rail’s Triplebock: Three Beer Stories. He emphasizes in the afterword that all are fiction, but that, of course, truth is sometimes best revealed through fiction. “The Brewery at Stelsov Abbey” is the story of a small community of monks who, basically out of desperation, strike a deal for the production of beer within their walls. They do not exhibit the due diligence Jeff and I saw last fall. And the story does not end well.

All of this seemed as if it should have been written down somewhere . . . We could have learned in advance how much Abbey Strelsov would have been asked to change, and we could have seen the price of rushing after money, and how it was not to be treated as an implement or utensil, but as something else entirely. And somewhere, in some missing second volume or torn-out appendix, we could discern the future of our beloved cloister, whose future now is sadly not so clear.

There’s no guarantee that the brewery at Mount Angel Abbey will be a success, but chances are that it will remain the “place of respite and peace” that Teri Fahrendorf remembers.

Further, I would guess that the beer will taste like it comes from that particular place, rather than being from nowhere or anywhere. We’ll find out in a year. Or maybe two. There’s a funny bit of wisdom I once heard visiting another monastery: “If monks had been building the pyramids we’d still be working on them.” They take a long view. From the hilltop on which Mount Angel Abbey sits that’s a particularly long view.