Given that Alan McLeod nominated him to be a dinner guest at Alan’s Beer Fantasy Dinner, Martyn Cornell was inspired to come up with his own guest list:

He explains why at his blog, The Zythophile, and titles the post “Guess who’s coming to dinner.” 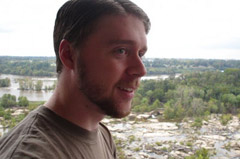 Eric Delia may be be relatively new to blogging, but has some interesting things to say — check out the post titled A Disturbing Trend. I’m hitting the road for a few days, but had to post this first because . . . Levi Stubbs and Bell’s Kalamazoo Stout, how brilliant is that?

You find the full length Fantasy Dinner here, but Eric also has a slightly shorter version for us CliffsNotes types.

1. Bernardo O’Higgins – One of the leaders of the Chilean War of Independence that was fought against colonial power Spain. Seems like an interesting and controversial historical figure that would be worth having around, if only to give his perspective on the time period and his struggle to defeat an imperial army. Since I’m somewhat of a history buff, I think he’d be a fine candidate for this soiree.

Beer: Kross Stout, modeled on an Irish Stout and made by a microbrewery in Chile, which I think would suit this guest’s tastes, seeing as how he’s half-Irish.

2. Bill Shankly – Liverpool FC’s most famous manager, who triumphed to bring the team from the lower rungs of the Second Division to the top of the First, and brought a slew of championships during his tenure as well. Shankly came across as a tough but stand-up guy who loved the game of football (soccer) and had an honorable and admirable approach to it, too. The table needed a prominent sports figure, and he’s one that immediately came to mind.

Beer: Traquair Jacobite, in honor of his Scottish roots and because it’s an all-around damn good beer in the first place, something I think Bill would appreciate.

3. Levi Stubbs – Lead singer of the R&B group The Four Tops, whose ability to sing out of his range lent the group’s songs a sense of urgency and liveliness. He’d bring vivacity to the conversation, plus a bit of cool and some culture to our group. I’m also a fan of all different kinds of music, so it was tough to pick one person to sit in that spot, but Levi was one of the first that I thought of. I think he’d be a great guest.

Beer: Bell’s Kalamazoo Stout, seeing as how both he and the beer are from Michigan, and I just think cool people would naturally migrate toward a quality Milk Stout like that. Either that or a Sam Adams Boston Lager; simple yet satisfying, with a laid-back flavor profile that the cool crowd would also enjoy, I guess.

4. My paternal great-grandfather – An immigrant from Croatia (then part of the Austro-Hungarian Empire), he came to America in 1901 and worked on the Pacific Railroad. Made it all the way out West, into Washington (prime hop country) and then to northern California. He owned a small farm where he made my grandfather walk to the market with eggs or produce to sell. Back on the farm, they would make their own homemade wine, even during the days of Prohibition.

Beer: Victory Prima Pils or Budweiser Budvar. I picked the two because I think a German or Czech Pilsener would suit him well, even though he was more of a wine guy. Something crisp and refreshing may remind him of time in Europe as a young man, perhaps getting a hold of a Bohemian offering or two in his day. Nevertheless, to be able to talk to this man about the trials and tribulations he faced by starting a whole new life in a completely different country would be fascinating to me. Sure, many families may be able to tell a similar tale, but that’s what makes this quintessential American success story a classic.

Port Brewing/Lost Abbey brewmaster Tomme Arthur writes it took him a week to come up with the guest list for his Fantasy Beer Dinner.

Tomme’s got all the details at his Brewer’s Log.

Alan McLeod has been writing about beer at A Good Beer Blog since 2003, “allowing the world to follow the highs and lows of his beery education in real time.” In addition to writing a few articles for trade magazines, this year he was asked to join in the writing of “Beer & Philosophy,” contributing a chapter entitled “Beer and Autonomy” that asks one question: why the heck is the law of beer like it is? In the rest of his life he is dad and husband, foster dad and sports fan and in-house municipal lawyer in just about that order.

It’s a funny thing about me and all this writing I’ve done about beer as, while it is as convivial a thing in life there is, for me it is a bit of a solitary obsession – me, my computer and a cold room in the basement filled with beer. If I am honest, my interests and influences are more English than North American but I seem to be far more fascinated by the great craft beers of America than anything I have had from elsewhere. That may be the classic Canadian compromise.

1. David Line. This 1960s-70s star of the UK home brewing scene was my introduction to making my own beer and appreciating the great beers out there waiting for me. I find the pre-Jacksonian, pre-CAMRA era of beer writing refreshing in that there was much individuality but no hint of snobbery. Recipes were as likely to be for a beet beer as an authentic imperial stout on the wood and the writing was plain. Line’s writings speak of a genial soul, happy to teach and happy not to be that worried about modern concerns for weekly units or extreme beer. I think he would make an excellent table companion.

Beer: cask London Pride, circa 1978, his desert island beer according to his Brewing Beers Like Those You Buy published in that year.

2. Timothy Finn: author of the 1975 book Pub Games of England. I have this idea that drinking beer was more of a side aspect to the life of an English pub compared to the other activities that went on. Being able to go to a pub and hurl massive round wooden cheese at stout pins in a game of London Skittles or playing an elegant if mantis-like game of lawn billiards would surely over-whelm the finer points of the chosen malt or hop in this bitter or that.

Beer: local ordinary bitter on cask, a 3.2% drink that would leave the lawn billiards cue steady.

3. Martyn Cornell. I wanted to pick one contemporary beer writer and I could have picked any one of many but I picked Martyn due to his incredible obsession to both detail and accuracy. His blog, The Zythophile, displays a commitment to drilling down to the actual while following stories not covered by the pack. I wonder how much Line and Finn would be able to teach him?

Beer: I have no idea but maybe a good thick 1700s West Country white beer as a stand alone first course would get the conversation going.

4. The me of 1985 when I was 22. Fresh out of undergrad I think I recollect that I knew a bit about beer but I was too obsessed with the nightlife in Halifax to take advantage of the opportunities to the point that when I went to Belgium in 1986, I stuck to Guinness. Sad. One evening of Line, Finn and Cornell would have given the him that was me a great head start in this interest of mine.

Beer: Just one draft Keith’s followed by a range of Belgian dubbels just to teach the ignorant wee mopey bastard good from bad. Jeff Bell (a.k.a. Stonch) is the freelance British beer writer behind Stonch’s Beer Blog and his work also appears in the print media. He focuses on his hometown of London, but notes, “I get around Europe and am a zealous advocate of Italian artisanal brewing.”

To me, Garibaldi is one of the most intriguing and exciting characters in modern history. A adventurer who knew no borders, a hero in the Old World and the New, he even lived in my native Tyneside for some time in 1854. His time there was the subject of a book by my old man, a fellow master mariner, now translated into Italian. He’d have no shortage of tales to tell, and I’d enjoy introducing him to the artisanal Italian beers I’ve been discovering during the course of this year.

The “Unsinkable Molly Brown”, an American woman, survived the maiden voyage of the Titanic, so I think she could handle a boozy dinner. After receiving a tip-off from Mark Twain, she and her husband made a fortune mining gold in the Rockies and bought a huge house in Denver. To the end of her life, she was a renowned raconteur. When I’m holding forth, getting a word in edgeways isn’t easy, so I think the other guests would appreciate her presence.

The beer: Her erstwhile home, Denver, is awash with first class beer these days. I’d ply her with Great Divide Titan IPA.

Noonan wrote The Ragged Trousered Philanthropists using the pen name “Robert Tressell”. He was a Dubliner who worked in South Africa and then England as a painter and decorator. During his lifetime, he never received the credit he deserved for the masterpiece of working class fiction he wrote in 1905. In a heavily edited form, it was first published posthumously in 1914, with a full edition only becoming available in the 50s. The book provides an astonishingly detailed account of the lives of working people and their families in a southern English town. For the beer and pub enthusiast, there are lengthy and detailed descriptions of pub life. Relatively little is know about Noonan’s life. He died aged 41 of tuberculosis and was buried in a pauper’s mass grave.

The beer: I’d offer Noonan Harvey’s Porter from Lewes, Sussex. In his novel, the protagonists are based in a town on the Sussex coast, and drink porter in their favourite pub.

Go on then, you old sod. He’s probably the beer writer in Britain with the most to say right now. Give him a few pints and it all comes tumbling out.

The beer: Dark Mild and a nice Franconian Dunkles. What else?