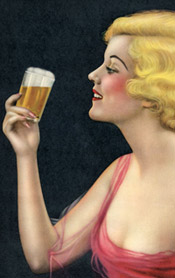 NEW BEER RULE #4: The god of beer is not consistency.

Full credit for this rule goes to Mark Dorber, the venerable British publican who uttered these words in 1996 at the first Real Ale Festival in Chicago.

He was speaking specifically about cask-conditioned ale, but the rule applies fairly to most small-batch beers.

This doesn’t mean that a beer needn’t be consistently good; only that it doesn’t have to taste the same every batch. Or in the case of cask beer, the same the second day it is on dispense as the first. Or in the case of a beer that you might cellar for a few years the same two years into the process as five years in.

Look, same is OK. It’s what most people seem to want. That’s why Anheuser-Busch goes to incredible lengths to make sure beers such as Budweiser – brewed in 12 different plants in the United States and other around the world – taste the same no matter where they come from. They don’t want us commenting on the nuances of Newark (New Jersey) Bud versus those of Fort Collins (Colorado) Bud.

Small batches lend themselves to greater variability. Hop varieties taste different not only from year to year, but from lot to lot – depending, for instance, if they are grow high on a hill or in the lowlands of a rolling hop district. The same may true for barley that will be turned into malt. (And then there are process differences, etc., but let’s keep this short).

This is why it is silly for Consumer Reports to rate beers (see what Ron at Hop Talk has to write about that), and just another reason that assigning a number to a beer doesn’t work for me.

Back in the 1980s, Michael Jackson discussed consistency with Roger Schoonjans, then brewing director at Belgium’s famed Brasserie d’Orval. “People should not want our beer to taste exactly the same every time,” he said. “They want the gout d’Orval (flavor of Orval), for sure, but they want to be able to chat about it: ‘I think this one is a little more hoppy — yesterday’s was rounder . . . .’ In that respect, they treat it like wine.”

You don’t have treat your beer like wine to appreciate that worshiping at the foot of consistency means that you’d be giving up something you should not want to.

Olympia brewery tradition survives
Aromas, culture and sorting out what we taste

12 Responses to New Beer Rule #4: Variation is not a flaw