Today’s post is part of #BeeryLongReads2020. Look for the hashtag on Twitter or visit BoakandBailey.com to find more long reads. Also, note that I’ve embedded tweets, but also included the words in the story for those who may not see the embeds.

I pretty much lean into tradition when it comes to beer and brewing—because it’s what I’m interested in—but the discussion around “authenticity” is often exhausting. That somehow, if it isn’t “authentic,” it isn’t good. And who bears the right to deem something authentic anyway?

About a week ago, Jenny Pfäfflin—a beer, baseball and Danish hot dog enthusiast who happens to be exam manager for @cicerone—tweeted, “I pretty much lean into tradition when it comes to beer and brewing—because it’s what I’m interested in—but the discussion around ‘authenticity’ is often exhausting. That somehow, if it isn’t ‘authentic,’ it isn’t good. And who bears the right to deem something authentic anyway?”

Perhaps authenticity is worth considering within the context of music.

Lonnie Pitchford, who was listed among the artists who would be playing Delta blues on this steamy 1992 August night, slid himself onto a barstool somewhat unsteadily and ordered a cocktail. A fan approached him cautiously to ask what time he expected he’d make it to the small stage at the Rivermount Lounge in Clarksdale, Mississippi. R.L. Burnside has just finished and The Jelly Roll Kings were setting up.

Tomorrow he would play at the Sunflower River Blues Festival, where the Jelly Roll Kings and Katie Webster headed a lineup that included Pinetop Perkins, Snooky Pryor, Mose Allison, Jessie Mae Hemphill, Lonnie Shields and others as well as Pitchford.

Pitchford had spent much of Friday in Memphis 75 miles to the north. He was performing at festival where one of the benefits was a constant supply of cold beer. In the summer of 1992 he was a celebrity within a certain circle of blues fans. 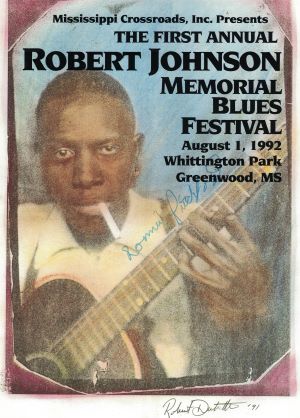 Twenty years earlier, when he was only 16 years old, Pitchford first performed at the Smithsonian Institution’s Festival of American Folklife in Washington, D.C. He became an international traveler, but he never really left the Mississippi Delta. He worked as a carpenter, made musical instruments, and still played in juke joints.

“The music is sweeter here,” he said a week before at the Robert Johnson Memorial Blues Festival in Greenwood, the town near where the legendary blues artist died at the age of 27. “This is the root.”

When Pitchford died in 1998 from complications related to pneumonia, John Fogerty would help pay for his headstone. He merited an obituary in The New York Times that began, “Lonnie Pitchford, a Mississippi bluesman who was dedicated to reviving early Delta blues, died on Nov. 8 at his home in Lexington, Miss. He was 43.”

More footage showed Pitchford nailing a broom wire to a pillar on the front porch of a house. He wrapped the wire around a second nail below, then drove that in as well. He plucked it, slid a snuff tin between the wire and the pillar, tuning it before he wrapped his arms around the pillar and began to play. “Those actually the songs I played when I was a kid,” he said in the film.

Pitchford taught himself to play the diddley-bow when he was five or six, depending on when he was telling the story and who was taking notes. When he played festivals he often began by assembling a rudimentary diddley-bow on stage, and playing it, before picking up other instruments. He first learned a country version of the Delta blues from Eugene Powell, also known as Sonny Boy Nelson and once a member of the popular Mississippi Shieks.

At the 1982 World’s Fair in Knoxville, Tennessee, he met Robert Junior Lockwood, who became his mentor. Lockwood considered himself the stepson of Robert Johnson, which is why he called himself Robert Junior Lockwood rather than Robert Lockwood Junior. Although Johnson was notoriously secretive, he shared his technique with the teenage son of the woman he was living with. “Robert wouldn’t show me stuff but once or twice, but when he’d come back, I’d be playing it,” Lockwood told music historian Robert Palmer.

When tomorrow came in Clarksdale, Pitchford arrived at Sunflower festival with a homemade diddley-bow in hand. From a distance, its blond body carved out of wood, it looked a bit like a banjo. Before he was to go on stage he sat amidst shirtless college students, coaxing sounds they couldn’t imagine but somehow expected from such a simple instrument, fantasizing they might be Lomax themselves, collecting field recordings. 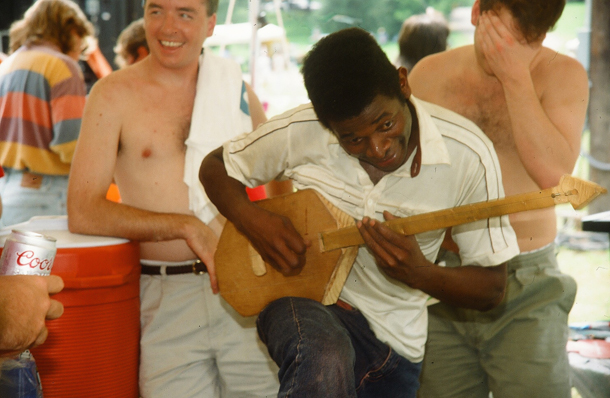 They grinned at each other, shaking their heads in wonder, offering Pitchford one of their beers. Pitchford looked boyish and amused, like he knew something the rest of us didn’t.

Lockwood had taught Pitchford the opening tunings for a six-stringed guitar, and Pitchford further used Johnson’s recordings to adapt his own slide technique to mimic Johnson’s. His music could sound, when he wanted it to, eerily like Johnson’s.

On the only album of his own, he recorded two versions of Johnson’s “If I Had Possession Over Judgment Day,” one a solo track that sounded as if it could have been recorded sixty years before, another with a band, more modern, jazzy, the word “possession” turned into a reverberating, funky groove of its own.

(You can listen to the solo version here, recorded for the movie “Deep Blues.” The soundtrack is available on CD.)

The first version is more traditional, and it is easy to describe as authentic. In the second, Pitchford is no longer simply a revivalist or a recreator. He is a modern artist, making something new, something that spoke to and of the Delta in the 1990s. Wouldn’t you call that less authentic?

In Faking It: The Quest for Authenticity in Popular Music, authors Hugh Barker and Yuval Taylor, write that white blues fans redefined the genre to exclude anything too jazzy or upbeat, excluding artists that were “too sophisticated.” They elevated primitive artists, such as John Lee Hooker, that black audiences had not necessarily embraced. “In this way, the quest for authenticity did tremendous damage to the blues by codifying certain traditions and limiting innovation,” they conclude.

Barker and Taylor propose that the quest for authenticity in music has become a dominant factor in forming musical taste. In the process, they often focus on performers in interested in proving how “real” they are (or were).

Some chapters work well, others not so much. But the authors provide a way to think about authenticity that seems worth considering, suggesting there are three paths—representational, cultural and personal. Their explanation:

"Authenticity" is and always has been a moveable feast anyway. If you want to brew eg an "authentic" porter I can point you to at least six different eras of porter you can be "authentic" to, all different in ingredients and methods of brewing

British journalist and beer historian Martyn Cornell replied to JP’s tweet: “‘Authenticity’ is and always has been a moveable feast anyway. If you want to brew eg an ‘authentic’ porter I can point you to at least six different eras of porter you can be ‘authentic’ to, all different in ingredients and methods of brewing.”

When it is possible to point to evidence, the sort of recipes and process detail that Ron Pattison or Cornell provide, it makes the conversation easy. Or at least it should. And representational authenticity seems to cover whether a beer fits within a particular style. (Pretend that we are not required to pause here and argue about style guidelines.)

In a followup tweet, JP wrote, “Anyway, for every pedant who logs in to say, ‘This isn’t authentic,’ there’s someone who will say, ‘This reminds me of home.’ And that’s worth more to me than anything else.” Then she added, “(I’m mad about a Facebook post I just read can u tell? Lol)”

Via DM, I checked to see if when she asked who bears the right to deem something authentic anyway? the unabridged version would read “authentic to style.”

Yes, she replied before adding, “When I wrote that, I was thinking about the idea of ‘house beers’ when it comes to small, family-owned breweries in traditional beer-making regions (I feel like American beer will never be a part of this conversation). Like they’re not making a ‘helles’ per se, they’re just making a pale lager. And that lager may be hazy. And by some definitions, then, that doesn’t make it an ‘authentic helles’ . . . But everyone’s grandma has her way to make red sauce; does it make it less authentic if it’s not how we think red sauce should be made?

Allowing for cultural authenticity and personal authenticity may be too ambiguous for some people. To me, they make room for us to call beers that remind us of home or grandma’s red sauce authentic. They allow musicians such as Cedric Burnside (grandson of R.L. Burnside), like Pitchford did a generation ago, to mix something more modern with tradition and remain personally authentic.

Your homework is to identify beers that do the same.