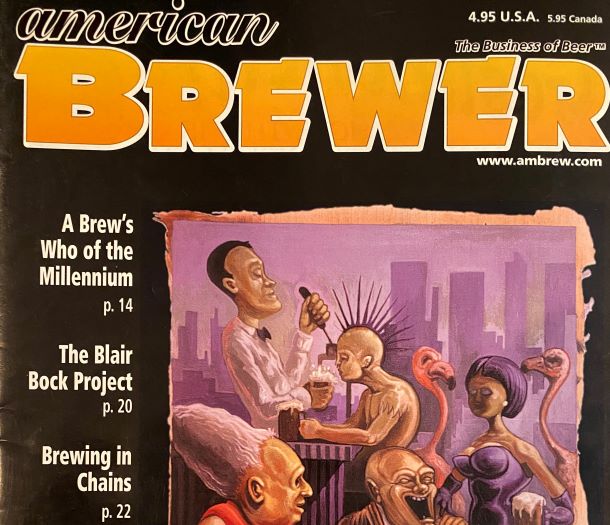 Back in the day I yielded to temptation and posted lists. I also railed against them. So you might figure there is no reason to trust me.

But two lists (the second is really multiple lists) that showed up last week sent me to the files to dig out a couple from the days of print that I will share them here.

The headline on the first—The 25 Most Important American Beers of All Time—screams bring back a Jay Brooks takedown (another back-in-the-day thing in which Jay would dig deep, point after point, about something written). I commented in one Twitter thread, and otherwise have three questions.

1) Anchor Steam over Anchor Liberty?
2) No Ballantine IPA?
3) No mixed fermentation beer? There is a passing mention of La Foile (although it is called La Joile) in the description of New Belgium Fat Tire). It’s not like Wisconsin Belgian Red from New Glarus Brewing was flying under the radar in the mid-1990s.

“The Best 20 Beers in 2020” from Craft Beer & Brewing magazine are not the 20 I would pick. Heck, I’ve only tasted a few of them. However, I did pick my 10 for the magazine. That list isn’t online yet, but if you care the magazine went in the mail to subscribers last week and should be popping up on newsstands. (Update: Now available.)

I occasionally write stories for CB&B, so feel free to disregard two thoughts:

1) Joe Stange and I each chose a beer from Urban Chestnut Brewing in St. Louis. Different beers. Joe moved back to Missouri from Germany last year. He picked a beer he drinks regularly. We lived in St. Louis the first six years after UCBC opened. I chose a beer I used to drink regularly, and was reminded during a trip back early this year how much I miss it.

2) The CB&B list is a combination of rare and regular, which is a good thing.

(The Top 20 list is accompanied by several readers’ lists. These are always fun to read.)

Two decades ago, American Brewer magazine assembled “A Brew’s Who Of The Millenniums: 25 Of The Most Significant Figures In Brewing Over The Last 1,000 Years.” There were two lists: B.J and A.J., Before Jack and After Jack, Jack being New Albion Brewing founder Jack McAuliffe. (He’s only 14th on the A.J. list.)

I’m only going to list the names, except to note the James Watt at #10 is not the BrewDog CEO, but the 18th-century inventor of the steam engine.