Three stories to consider for background:

– Pete Brown wished William Morris, who he calls the godfather of craft beer, a happy birthday. Spoiler alert, he concludes:

“Arts & Crafts, like craft beer, was easy to criticise, easy for those who wanted to exploit it and manipulate it to do so, easy to dismiss as being expensive and over-hyped. But a century after its supposed demise, both it and its founder remain culturally vital. As long as we have cheap, mass-market, industrialised production making goods for everyone, we’re going to have niche craft versions produced as a counter-cultural alternative – available for anyone who can afford to buy them.”

– In the newest issue of The New Brewer, Mike Kallenberger asks if the brand of craft beer has been diluted. (The story is available to Brewers Association members online, to the link may or may not work for you.) He writes:

“I’ve long been concerned that, by moving in the direction of ‘drinkability’ that mainstream brewers almost fetishize, the meaning of craft beer itself has become watered down.”

– Josh Noel writes about the sale of Goose Island Beer to Anheuser-Busch InBev 10 years later. Deep in the story he writes:

“The biggest loser during the last 10 years, arguably, has been the consumer. The reason isn’t just the uninspired beers coming out of the Anheuser-Busch breweries — it’s that it’s nearly impossible for most people to tell which brands are made by Goose Island in Chicago and which are made by Anheuser-Busch in far-flung states.” 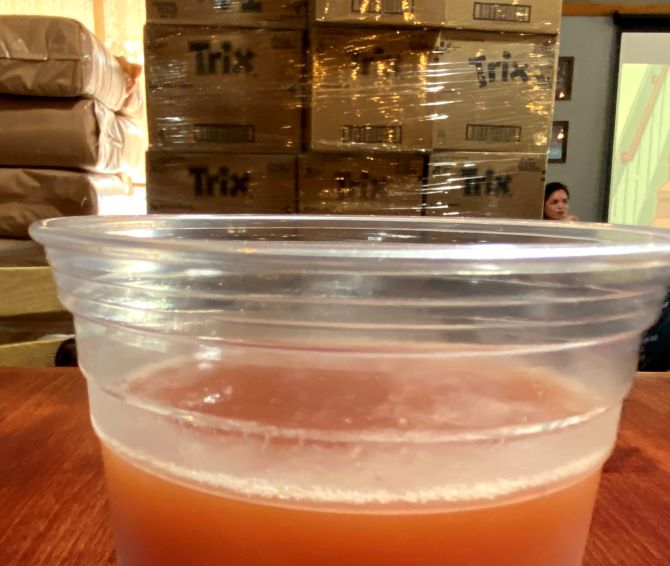 Pomona Paradise, and ingredients in waiting at Pontoon Brewing.

The draft list at Pontoon Brewing in the large Atlanta suburb of Sandy Springs currently includes beers with flavors reminiscent of girl scout cookies, Bananas Foster and cherry cobbler. And, of course, more than one hazy IPA.

Smoothie-style sour is not a category at the Great American Beer Festival, but it is at Pontoon. Saturday the brewery released Pomona Paradise, “Brewed with mangos, blackberries, limes, and raspberries, this beer is a liquid cornucopia of juicy, tart, and delicious fruits. 5% ABV.” 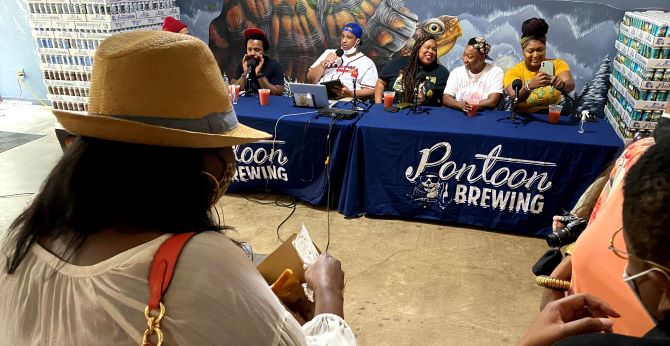 Pontoon brewed the beer in collaboration with @craftwomenconnect and @blackbrewbabes. As part of the Brewing Conversations Project, the women talked about the beer with @theatlantapodcast. And Saturday the faces in the crowd at Pontoon, inside and out, listening to the panel and not, looked a lot more like those in an Atlanta grocery story than in most brewery taprooms. Many more people of color, many more women, fewer dudes with beards.

Kallenberger uses Brown’s book “Craft: An Argument” to introduce an idea central to his essay, thus quoting Brown: “As drinkers, we want ‘craft beer’ to mean something, and as an industry, small, independent craft brewers need to mean something.” And those who agree that “craft beer” is an overarching brand should be concerned viewing results of a survey that finds no strong “life values” associated with craft beer. The data “seems to indicate that craft beer is not as relevant, or appealing as it once was.”

What follows is my oversimplification. For thirty years, beer geeks have complained about how once dynamic beers have been dumbed down. Kallenberger points out that brewers may still be pushing brewing boundaries yet but be guilty of dumbing down the conversation; that is, not “reminding people that those who brewing them are challenging authority, celebrating self-expression, and creating something unique.”

For homework, I suggest reading more about Craft Women Connect. This is not a problem for them. Pomona Paradise is unique, there is no chance it was brewed in a factory far away, and if it is a luxury it is an affordable luxury.