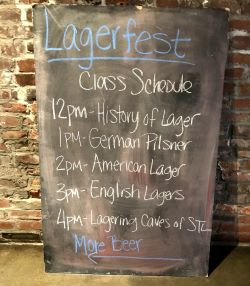 Here’s a game we used to play here 10 years ago, when people chatted in blog comments as often as on Twitter. Now it is a question asked more often on Twitter, but that takes a patience for following divergent threads I don’t have.

The goal is to identify the outlier and explain why it doesn’t belong on the list. There may be more than one answer, although I happen to have a specific one in mind.

I’ll be back Monday, shrug when I find nobody has left a comment and provide my answer, along with the reason I asked the question to begin with.

All five of these breweries made beer for the Urban Chestnut Brewing Company’s LagerFest in 2018. But there is something (recently) different about one of them.

March 1: The answer is Olde Mecklenburg. Here’s the reason why. 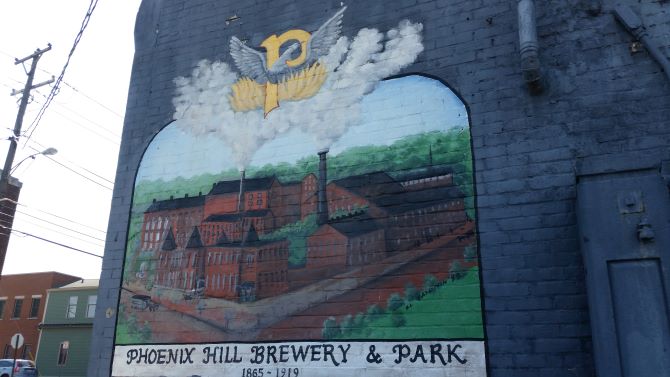 A mural in Louisville commemorates Phoenix Hill Brewery & Park. The brewery made plenty of lagers and also Phoenix Komon Beer.

I wrote quite a bit about this in “Brewing Local” (you should buy a copy) and also here in the blog. So I will keep this brief.

The beer was so specific to a place it could have been called Louisville Common rather than Kentucky Common. In 1909, a glowing description appeared in The Louisville Anzieger, a German-language newspaper. The translation:

“Beer has conquered the world. But one thinks . . . that this refers to lager beer. In Louisville, however, the beer drinker can enjoy double pleasure, as they can along with the lager beer enjoy the ‘common beer,’ a really great and increasingly popular product. It is a healthful, light, pleasant drink that people in other large American cities are for the most part unaware of. Perhaps its popularity, which it has always enjoyed here, would not be as great if, with improved brewing methods, better stuff had not become available.”

To this I’ll add something from Dibbs Harting, a homebrewer who was central to getting the history of Kentucky Common right, told me in 2015.

“I’m sure it was a fabulous bucket (growler) beer,”

Beer Lovers, a pub in Cartagena, Colombia – part of a worldwide phenomenon.

Context is everything, so I think there is value in reading these two blog posts in the same sitting. I’ll wait.

How will we understand the craft era? – from Jeff Alworth at Beervana.

An expedition into craft beer – from Sarah in Dublin, a Nashville native in Ireland.

The first is a sweeping overview, so let’s start with the second. Sarah signed up for the National Homebrew Club of Ireland’s BJCP Tasting Course and wrote about the first of six classes. The result is a delightful, breezy read from somebody who enjoys drinking beer.

Exhibit A: “I also found myself being influenced by what someone else was saying they could sense. Is this more caramel or raisin? I’m not sure. . . Oh, well, he said caramel, so obviously I can totally get that now. Of course, it all makes so much sense. What fool would say raisin? Amateurs.”

Jay Brooks broke a bit of news Thursday in his Flagship February post about Anchor Brewing. There is a new history of the brewery on the way that includes hundreds of archival photos.

The official publication date is May 2, 2023. That seems like a long time to wait to see if the book will provide a definitive reason why steam beer was/is called steam beer. Here are some of the contenders (I kind of like the “Doctor Steam” version myself):

– What looked and sounded like steam was generated by the pressure resulting from highly carbonated kegs.

– Steam hung above rooftop vessels that initially cooled the beer. 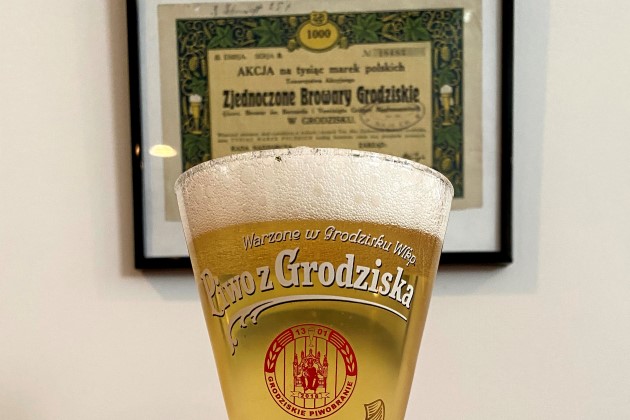 “Smoke taint,” an undesirable result of fires in grape growing regions that has plagued winemakers for years, came to hops in 2020. I wrote about the topic for All Access subscribers to the Brewing Industry Guide and will report more in Hop Queries next week.

Most important, this is bad news for farmers affected because it reduces the value of some of their crop. But brewers should be aware that tainted hops could make their way into the supply chain. As one grower told me, “Here’s hoping we don’t see a rush of rauchbier’s coming into the market.” Unlike many people, I like rauchbiers, but I’m not looking forward to being surprised by a juicy IPA that tastes like licking an ash tray. (“Licking an ashtray” being a phrase used to describe wines made with smoke-tainted grapes.)

There is a time, however, that smoke and hops belong together. So returning to one of my favorite topics, I’ve recently tasted two very excellent smoked wheat beers, a style that through the years has been known both as Grodziskie and Grätzer. (A bit of disclosure, the breweries involved shipped me these beers.)

The photo at the top is Chuckanut Grodziskie, poured into a glass Browar Grodzisk had made when they opened on the site of a former brewery in Grodzisk in 2016. That’s a stock certificate for United Grodzisk Breweries, the lone brewery in Grodzisk for most of the 20th century. Welcome to the full 21st Century Grodziskie Experience.