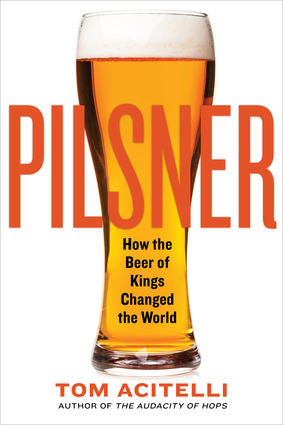 A couple of days ago, Jim Vorel went on a bit about how he was troubled to find “‘IPA-ification’ creeping into one of the greatest lager styles of all: Pilsner.”

Several Twitter threads followed, including this one (scroll up and down to catch the whole discussion). In it, David Berg at August Schell Brewing has a specific request, “Define Pilsner.”

Coincidentally, Thursday the European Beer Consumers Union posted “the most comprehensive guide to the growing range of beer styles found across Europe and beyond – their origins, differences and how to spot the best.” Tim Webb is the lead author and curator.

See Authentic Blond Lagers for a couple (Czech and German) definitions. But you might also read something Ben Keene wrote last year about “How American Brewers Are Updating the Classic Style.” He found a brewer who talks about “the pilsner umbrella.”

Vorel writes, “Before the craft beer renaissance, ‘pilsner’ had become indistinguishable from tasteless, watery, boring American macro lager, and it was often denigrated as a result. It took the emergence of beers such as Victory Prima Pils to start resurrecting the style as it was meant to be.”

Although “A fine pilsner beer” is printed on the side of Miller Lite cans, Vorel puts it in the “tasteless, boring” camp. Likewise, the EBCU would not define it as a pilsner. But consider this story from “Pilsner: How the Beer of Kings Changed the World” (today’s recommended reading).

Author Tom Acitelli writes that Victory Brewing Co. co-founder Bill Covaleski had his doubts in 1996 when he and Ron Barchet decided to release Prima Pils as one of their first packaged beers. “Miller Lite was paraded around as the true taste of pilsner beer,” Covaleski thought. A distributor told him, “You’re walking into the biggest battle ever. Everything’s pilsner beer, and none of them taste like yours. This is not going to be easy.”

If you ask 100 people watching some sports event taking place this weekend if Miller Lite, or whatever similar beer you choose, is a pilsner and 72 say “yes” is it not a pilsner? Perhaps we should just agree that it depends on who is writing the definition.

Acitelli uses pilsner to tell a larger story about beer and change. He writes it “had a way of intersecting with major world events. These intersections began even before its birth in 1842. They continued through the end of the nineteenth century with the rise of imperialism and colonization, and through the two world wars of the twentieth century.”

At the same time, he charts the course that takes pilsner around the world from its ancestral home in Bohemia, including multiple stops in the United States. Because “American pilsner was the exact sort of beer that rewards streamlining . . . (it was) the epitome of modern beer.” Becoming a light beer was a natural progression.

Prima Pils, Urban Chestnut Stammtisch, Slow Pour Pils from Bierstadt Lagerhaus, these are not part of that progression. They certainly are not what Vorel is ranting about (“Keep your ‘juice’ out of my damn pilsner”). They certainly are what I want to find in a glass when I order something called pilsner. And I don’t expect to find any of them dry hopped with Citra or Talus any day soon.

But . . . Germans did dry hop beers more than 100 years ago (more in the next issue of Hop Queries) and Barchet has tinkered with the Prima Pils recipe to make the beer a little less bitter and a little more aromatic. “We’re really happy with how it came out. It’s a little more of a modern take based on where taste buds are and where the market is,” Barchet told Kate Bernot last year.

How many times since 1842 has that been said about the next new pilsner?