By Stan Hieronymus on December 17, 2018 in hops, monday links

Case Study: How Trillium (Temporarily?) Lost the Plot.
Jeff Alworth writes, “An industry insider texted me as all this was playing out and joked snarkily that Trillium had ‘been sideswiped by finding that craft beer fans drink the ‘craft beer movement’ Kool-Aid!’ If a brewery preaches an ethos that craft beer is different, that it is about community and connection, then it will be held to that standard.”

That’s one bottom line here. Another, outlined in detail, is that growth is intoxicating but new owners often are not prepared for the challenges. That’s why I’m surprised that none of the stories linked to why Massachusetts officials shut down the brewery for a month in 2014 when it was discovered Trilliam was operating without a license. At that time, fans were clearly on the side of the brewery.

Don’t Let Me Down – Failure of Equipment Manufacturers Puts Brewers in Disarray.
This must be the biggest non-industrial beer story of the year, right? 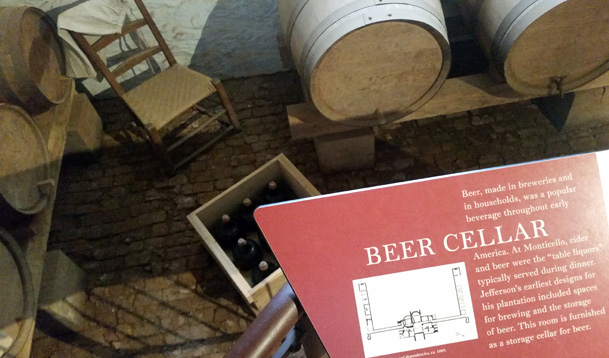 Missing Ingredients – The (Incomplete) Story of Thomas Jefferson’s Unsung Brewer.
Supplemental reading (a 2017 post at Fuggled):
The Brewers of Monticello.

In the first story linked, J. Nikol Jackson-Beckham cites Dr. Kelley Fanto Deetz, who describes the challenges of recovering lost histories as “constant frustration and occasional reward. Enslaved people’s stories are hidden in recipes, in the architecture, in letters, diaries, and financial records of their enslavers. Evidence of their talent and skills were consumed both literally and figuratively by the ones who enslaved them.”

Recipes are but one tool author Michael Twitty employs in The Cooking Gene, and they are made more powerful by the context he provides. In the introduction he writes, “We are unwitting inheritors of a story with many sins that bears the fruit of the possibility of ten times the redemption. One way is through reconnection with the culinary culture of the enslaved, our common ancestors, and restoring their names on the roots of the Southern tree and the table those roots support.”

There is a beer connection the 2018 James Beard Awards’ Book of the Year winner, if you need one. In “Chapter 15: Shake “Dem ‘Simmons Down” Twitty provides a recipe for, Red Straw Persimmon Beer. He writes, “In the contemporary food scene, the world of foraging has, by default, become predominantly middle-class and white. I remember a childhood full of stranger squinting, wincing, and squealing, ‘Ugh, don’t touch that, you don’t know what that is!’ But I did know because my grandparents and my father taught me about senna, rabbit tobacco and poke salad, honey locust and my personal favorite, the persimmon.”

Juneteenth at the Atlanta History Museum this year included a talk and cooking demonstration by Twitty. He is even more engaging in person than print, mixing long stories with short tweetable sentences. For instance, “Food is reality.”

A Fluid History of Wisconsin Breweries.
Water and wastewater.

The Secrets of Doom Bar’s Success.
During the recent MLS finals at Mercedes Benz Stadium we walked past the Blue Moon bar with friends and one said, “I don’t think it is as good since Coors bought it.” I gently explained that Coors always owned the brand, and how the guy who developed it had moved on and started his own company producing THC-infused non-alcoholic beers. That took the conversation in another direction and to Sweetwater 420 Strain G13 IPA, which he found much more interesting.

Blue Moon Belgian White (first called Bellyslide Belgian White) launched in 1995, the same year as Doom Bar. The similarities of how each because ubiquitous are not surprising, nor are the misconceptions (or at least differing opinions about quality). Like Martyn Cornell’s essay about pubs and bars linked to last week the difference between UK and US beer cultures is on display. Lots to think about here.

The Best and Worst of the Beers of 2018.
A listicle compiling listicles. Would I be pointing to it if Don Russell had not treated my contribution to Craft Beer & Brewing more kindly than he treats Vinepair? Perhaps not. But The Top 10 Reasons Vinepair’s Top 50 List Blows made me laugh.

My own golden pints.
Alan McLeod throws down the gauntlet, challenging other bloggers to participate. It is a fine idea, but because I’ve already compiled a list of a different sort for Craft Beer & Brewing (see directly above) I will be passing.

Shaken not stirred: James Bond had a severe chronic alcohol product.
This study won first prize in the Medical Journal of Australia’s Christmas competition. It reads like it could have been published in The Onion. Perhaps Mr. Bond would be better off drinking beer.

If you don’t subscribe to Hop Queries I invite you to.

The Great Hop Lift 2018.
The hops were saved. One of my favorite stories of the year.

The Bitter Boom-And-Bust Tale Of Colorado’s Bet On Local Beer Hops.
To summarize, Coors agreed to pay farmers a silly high price for hops for several years to use in its Colorado Native beer, telling them at the time that Coors would not continue to pay those prices indefinitely. Now MillerCoors is not. I’ve talked to hop growers in the Northwest who have visited Colorado and are certain it is possible to grow quality hops there, but farmers are not going to succeed if they treat hops like another commodity.

Food truck growth continues to shape cities.
They are spaces “where ordinary people, not urban planners, create moments in time and space that capture the popular imagination, and of what we call cultural place-making.”

The most favorite thing so far. People waiting in line for ?@LawsonsFinest? even though they are out of beer. Seriously that's dedication! ??@BeerAdvocate? ?@lostabbey? #hazefordayz pic.twitter.com/5cMtGcbYay