By Stan Hieronymus on January 7, 2019 in monday links

Tilting a glass sideways casts the liquid inside in a different light. Best not attempted with a full shaker pint. 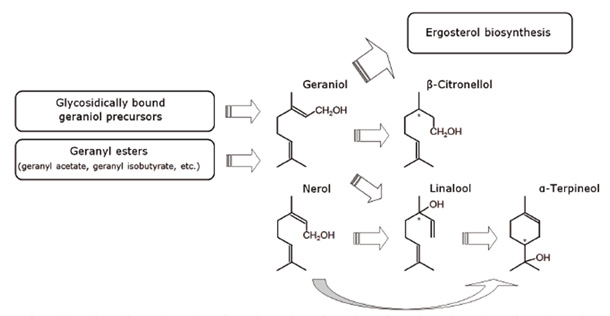 I use the the diagram above* when I talk to brewers about research into biotransformations. This excellent story explains what is and is not understood about the process in plain English and in a way that is informative for both brewers who crave know more about what the heck is going on with these hops as well as drinkers, who may choose to know as much or as little as they like. Either way, Tom Shellhammer at Oregon State University provides important perspective. “I worry sometimes that what happens in the research world—it’s new, right? So there’s a new discovery, and the brewing community views it as the latest answer to everything. And people perseverate or maybe even fetishize [it],” he says.

*Credit to researchers at Sapporo Brewing, who have been at the forefront of research into biotransformations, for the chart. 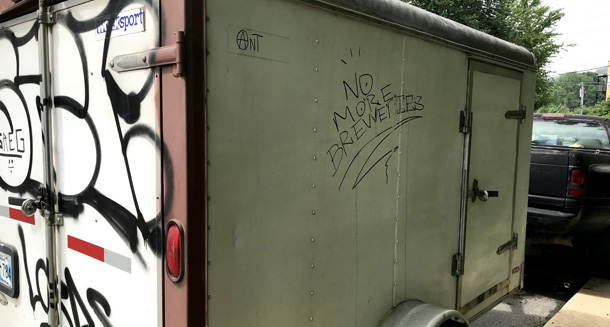 This story has been told thousands of times in the “beer space”: homebrewers turn entrepreneurs, deciding they want to open a brewery in their neighborhood. Praise be. Next City provides the sideways view: “Aside from the financial challenges, the brewers will also have to face the stigma associated with breweries in communities at risk of gentrification. Marroquin and Ruiz were raised in South Central, while Santana’s family is in Bell, Calif. Despite their local roots, they expect some backlash. In nearby Boyle Heights — a predominantly working-class Latinx neighborhood — anti-gentrification activists have been protesting breweries sprouting up in the area. The way the activists see it, breweries invite more affluent, higher-income hipsters to cross the L.A. River into the community.”

(The “no more breweries” photo was captured earlier this year during a visit to Asheville, N.C., where sometimes it seems if there is a brewery on every block.)

Elizabeth Warren’s beer moment.
The #beertwitter discussion I saw related to this focused on the brand she was drinking – Michelob Ultra. Perhaps there was something else to consider.

– Bold predictions in Colorado.
– Five reasons to look forward to 2019.
– Views from the nation’s capital.
– Breaking down the Beer Advocate ratings.
OK, I have a well-established bias toward place-based beers, but I think Jeff Alworth (second link) is on to something when he writes, “The more beer becomes an established fixture in American life, the more these ultra-local breweries can become centers of life in small towns—and reflections of them.”

But local is local, and what is true in Colorado (or a specific region of Colorado) is not true in Georgia. So is interesting that Jonathan Shikes (first link) suggests a big bounce back for bigger craft breweries because of the new Colorado law that allows supermarkets and convenience stores to sell full-strength beer. Nonetheless, he also predicts a big brewery will go kettles up. “The brewery that closes or sells its assets could be an older one or a well-known name. It could be a brewery that opened in the past six or seven years, grew quickly and then ran into any number of problems. Whoever it is, the news will be sad and stunning.”