By Stan Hieronymus on September 12, 2018 in beers of conviction, place/local/ingredients 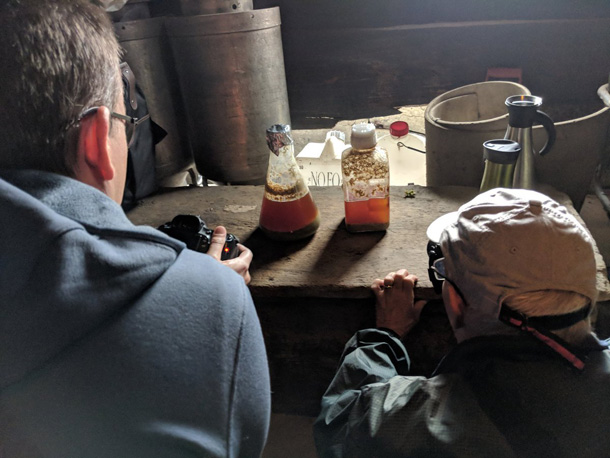 Joe Stange posted the photo above on Twitter, captioning it “Kveik and the paparazzi.” That’s Lars Marius Garshol on the left and me on the right. The photo below provides a close up look at kveik, but maybe not as clear a picture as we got today with the release of a paper in frontiers in Microbiology titled “Traditional Norwegian Kveik Are a Genetically Distinct Group of Domesticated Saccharomyces cerevisiae Brewing Yeasts.” 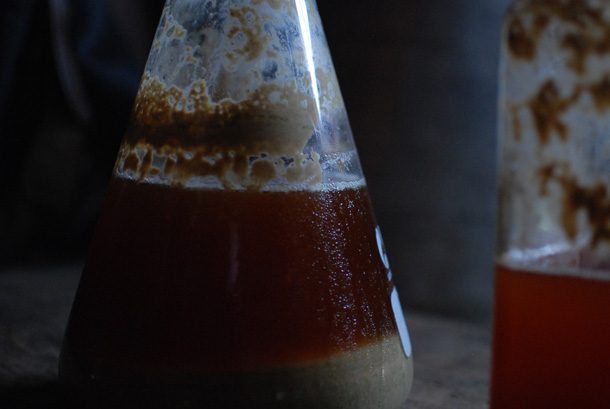 Backing up just a bit, not long after I landed in Norway two weeks ago I posted a short video of foam pouring out of an overcarbonated beer that have been fermented with kveik. That prompted this question: “Doing research for a future book, I hope?” The answer is that I am not working on a book involving Norwegian farmhouse beers, kveik, farmhouse beers from other regions, or other ancient drinks. Garshol has that under control, and although it seems the research part never ends (because it really doesn’t ever end) the result will be a book from Brewers Publications in 2020.

I was in Norway at the invitation of organizers of Bergen Ølfestival, a two-day event featuring more than 40 Norwegian breweries in the stunningly beautiful city of Bergen. I gave a rather technical presentation about hops to brewers the evening before the festival started, then a less technical one for the public on the first day. Of course, one of the ways Rolv Bergesen convinced me to make the trip was a chance to visit Norwegian farmhouse breweries. We (Daria, who arrived a few days after I did, Stange, and Garshol) headed to the Dyrvedalen valley south of Voss the day after the festival, and Sjur Rørlien took us to two farms where beer is still made. I will have details in a future issue of Zymurgy magazine.

Now back to kveik. 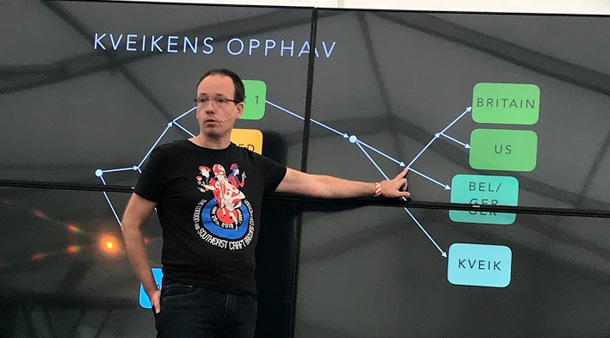 Although Garhol’s presentation at the festival was in Norwegian the graphics made it easy to follow, and he laid out much of the information published today. He also posted an excellent summary in his blog, although this doesn’t really summarize easily.

At a geek level there is this: “The results were quite surprising: kveik belongs to Beer 1. This is the group that has Belgian/German strains on one side, and UK/US ones on the other.” Too geeky? If you are looking for background, I wrote about the family tree of yeast for All About Beer magazine last year.

At a disrupting the beer landscape level there is the fact that kveik ferments at much higher temperatures than other yeast strains without creating off flavors and it isn’t wild. It may have resulted from a beer from Beer 1 mating with a wild yeast, but it is POF- rather than POF+ (again see the family tree story).

When kviek started showing up in the United States less than two years ago brewers I talked to were interested in using it in “farmhouse” beers because it came from a farmhouse. They expected saison attributes because too often, and incorrectly, saison and farmhouse are used as synonyms. The brewers who will be creating new and interesting beers fermenting them with kveik are the ones who appreciate it for its difference. What might a porter made with kveik taste like, or a brown ale, or a beer made with two-row malt and three types of basil?

Ales Through the Ages canceled
Gose: Balancing tradition and innovation