By Stan Hieronymus on November 11, 2020 in place/local/ingredients 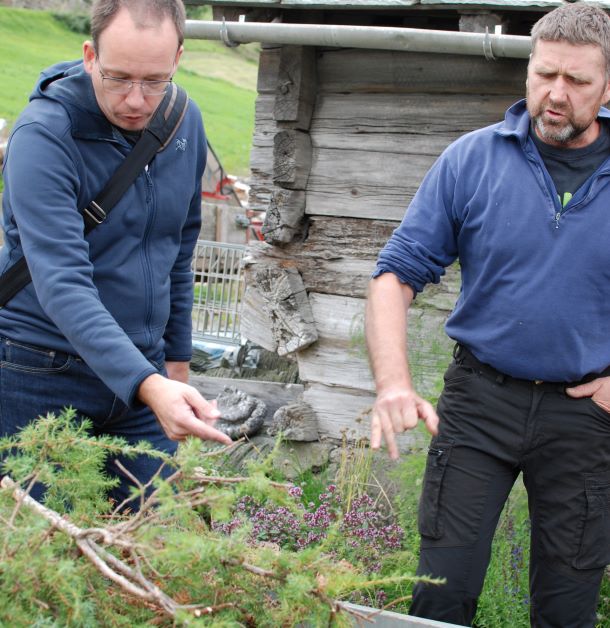 Lars Garshol, left, and Bjørne Røthe, discuss the freshly cut juniper Røthe will use to brew a beer in the 18th century out building behind them.

On the train ride to the Dyrvedalen Valley in western Norway a couple of years ago with Lars Garshol “disruption” was among the many things we talked about.

The various strains of kveik he helped make their way from farmhouse breweries in Norway had already begun to disrupt American brewing because these strains have unique qualities. They do their work quickly, they work at ambient temperatures and they create unique odor/taste compounds.

But it wasn’t, and isn’t, clear how the interest in kveik and the farmhouse beers in the book—”Historical Brewing Techniques: The Lost Art of Farmhouse Brewing”—might disrupt things in the Dyrvedalen Valley. At the time, Garshol said he hoped that if modern brewers embraced old ways, ways that were in danger of disappearing, that local ones would as well.

More recently, in a post at Good Beer Hunting, Claire Bullen writes, “The reason he published his most recent book in English is because he thought of the project primarily as a marketing exercise, he admitted. He’d like to see a TV series on farmhouse brewing produced for Norwegian audiences, he told me, and a network of experiences made available to beer tourists: recreated oppskåkes, beer dinners in brewhouses, traditional music to round out the experience.”

Monday, Jeff Alworth wrote about kveik. And on Twitter he summarized, “Craft breweries are rapidly turning kveik into yet another juice-delivery system, which risks slamming the door on far richer, more interesting possibilities. Let’s all be aware of what we’re dismantling before we dismantle kveik completely.”

This makes me wonder #beertwitter would have had to say had it been around in the 19th century when Emil Hansen isolated a pure yeast cell, or when E.S. Salmon first put an experimental hop he called ca9* in the hands of British brewers.

*That hop became Brewer’s Gold. It did not create the same sort of excitement as Eclipse.

Is it possible to be ‘a little too New Orleans?’
You want hop flavors? Here are 107 to choose from

Some Mondays, a link to a post you might want to read and because it leaves me asking a question or two. Questions included.