Researchers in Australia have developed an “electronic nose” they say will help craft breweries monitor beer quality. Seems like it would work for other breweries as well.

This e-nose is a small circuit board that measures gases emitted from beer. It uses machine learning (magic words which we’ll get back to soon) to determine if a beer has unwanted aromas. The gases include carbon dioxide, ethanol, methane, hydrogen, hydrogen sulfide, carbon monoxide, ammonia and benzene.

The electronic nose has also been used by the researchers in conjunction with biometric indicators such as heart rate, body temperature, brainwaves and facial expressions to gather more information from consumers while tasting a product.

Basically, it is good at warning brewers there’s something about a beer that consumers won’t like. That’s a positive. However, directing consumers to a beer they will like or providing an idea of what it will smell and taste like is a different challenge. Aroma, and therefore flavor, remains something of a black box.

Kevin Verstrepen and Miguel Roncoroni at the laboratory at the University of Leuven’s Institute for Beer Research and VIB Center for Microbiology head up a project intended to match compounds that can be measured with sensory preferences. One result is a book, Belgian Beer: Tested and Tasted.

The Belgian book is just the beginning. “We are now analyzing US beers,” Verstrepen wrote via email last month. “The first shipment just came in – we now have a complete cold room filled with US beers ready for analyzing and tasting. In fact, if breweries are interested in having their beers analyzed and (possibly) also appear in a similar US book, they should contact me.” (He receives hundreds of emails at kevin.verstrepen at kuleuven.vib.be each day, so make sure it doesn’t look like spam.)

“We don’t just do a standard aroma analysis, but a very thorough one, measuring more than 200 compounds,” he explains. Fifteen trained panelists then blind taste the beers and describe the aroma and flavor. “We are using this data to have computers learn which, and how, chemical compounds contribute to specific aroma’s and overall beer quality.”

They can already predict the score a beer will receive at RateBeer.com with 80% accuracy based only on the compounds (in other words, without tasting).

This is where machine learning, or artificial intelligence, comes in. They aren’t exactly the same, but close enough in this instance. Good Beer Hunting posted a story last week that I wrote about sequencing the genomes of the key ingredients in beer. The resulting information will aid breeders develop better raw materials. Better refers to more than aroma/flavor, so I suggest reading the story.

Beer, of course, is a sum of multiple ingredients and the result of multiple processes. “In my opinion, we will never be able to really obtain a beer’s aroma profile from DNA, and simply analyzing the beer itself will be the only real way to describe it,” Verstrepren says.

IntelligentX, an enterprise based in the United Kingdom, grabbed a bit attention in recent years for creating “the world’s first AI beer.” However, if you visit their website they are out of stock and it isn’t clear what might be going on. The site invites customers to train their personal algorithm by providing feedback about what they like and don’t like. The scientists in Belgium are taking a different approach, one similar to Pandora (and its Music Genome Project),

“The next step would be to use the algorithms to develop new (great) beers,” Verstrepren says.

It may provide brewers another tool when writing recipes. However, given that there are perhaps 1,000 odor compounds in hops alone, those machines have some heavy lifting ahead of them.

The book itself is as consumer oriented as it is scientific. “The results are really super-cool because we really get a scientific ‘map’ of beers that you can explore as if it was a country, with some beers being neighbors that differ in nuances,” Verstrepren wrote when research was ongoing. “Whereas you can also go to a very different part of the beer ‘country’ and find beers that are literally on the opposite end; or beers that are very similar in some aspects, but very different in others.”

Here are sections of a couple of pages, for Saison Dupont and Orval, showing some of what is included about each of 250 beers. Not shown are vital stats or where a beer belongs on the Belgian beer map. What are pictured are the closest “neighboring” beers, that is the ones that most closely resemble the feature beer’s chemical and aroma composition, even though some might taste quite different due to key odor compounds. 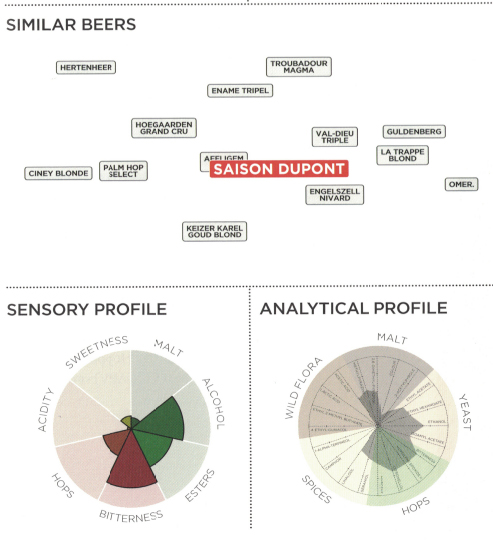 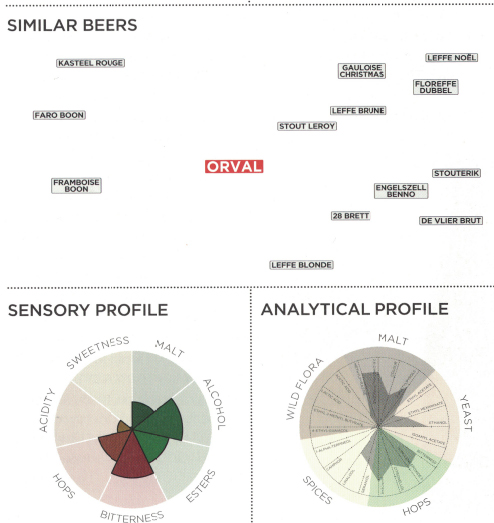