Hope you’re in a stout mood today, because you’re going to read a lot about them in various blogs in the first round of The Session. The theme today is “Not your father’s Irish stout.”

By Monday I will summarize posts on this topic from here and there and provide links.

As the instigator of this event I felt an obligation to make a good choice. I don’t mean the most spectacular stout I could find, but one that sets a tone for how I intend to approach this on a regular basis.

I thought first about a New Mexico beer, because I believe you should drink local and we have some excellent stouts in our state. But unless you come visit then you aren’t going to have much of a chance to find one of these. So I picked a beer from the region, from a brewery I know well, and one I’d certainly call “a good home”: Left Hand Milk Stout.

We (Daria and I) met Left Hand Brewing founders Eric Wallace and Dick Doore not long after they opened in 1994, introducing ourselves at the Great American Beer Festival because my aunt Gretchen lives in Longmont, where Left Hand brews. It took us three more years to get by the brewery, and it was the 50th for our daughter, Sierra. She was taken with the red-and-white Left Hand logo we brought home, and it’s likely one of the reasons she learned her left from her right early on. 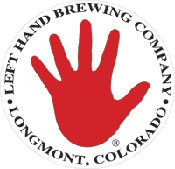 Although Left Hand distributes its beers in New Mexico, we often could find seasonals only in the Longmont area (this has changed, plus the Milk Stout is available year round and at a nearby grocery store). Left Hand produced just 20 barrels of Milk Stout the first year it was brewed and we missed it.

The second year our timing was better, so we were in Longmont about the time it was released. On the way to my aunt’s house we stopped at a liquor store. When I headed directly to the cooler and pulled out Milk Stout the man standing next to me – surely the one whose large motorcycle we had parked next to, given his leather garb and tattoos – nodded in approval.

It is, but like that biker not too smooth. The addition of milk sugar (lactose) provides a constant creamy sweetness that balances an abundance of aromas and flavors. Typical for Left Hand, the beer is made with five malts plus flaked oats and flaked barley. It proves a brewer can pack impressive depth and complexity in beer not much stronger than Budweiser (5.2% abv vs. 5%).

The nose is chocolate and burnt toast, with more rich chocolate and coffee flavors in the mouth. The finish is relatively dry, leaving a memory of coffee and sweet cream.

. Its London inventors sought a patent in 1875, they deemed the deemed the invention of a milk beer so unique. Jackson reports that by 1936 Mackeson’s Milk Stout was available nationally and the style began to be included in the range of most breweries.

The Mackeson’s label included the rather bold claim: “Each pint contains the energizing carbohydrates of ten ounces of pure dairy milk.” That didn’t last long.

Jackson concludes his history lesson with this thought: “For those with a lifestyle sufficiently leisurely, or eclectic, to permit a mid-afternoon or early evening restorative, a glass of sweet stout and a piece of cake is an innocent pleasure.” 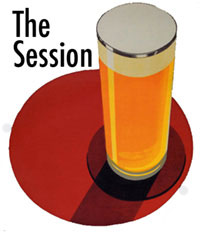 Jay Brooks has created a logo for The Session. He’s even given us multiple options – both to the size you use and also if you want to include the words “Beer Blogging Friday.”

I haven’t decided which I prefer, so don’t be surprised if you come back and words magically appear in the red circle.

You can grab what you want here.

Come Friday a bunch of us are going to write about stouts. The theme, class, is “Not your father’s Irish stout.”

Do we have to have a name, too? I’d like to get that out of the way, so I can help answer Alan McLeod’s question Do We Love the Beer or Brewer? and track all the chatter Lew Bryson provoke with his post What We ‘Owe’ the Industry, which was followed by a lengthy discussion at Beer Advocate.

Particularly since I disagree with everybody.

So in the interest of speed I’m picking a name, but not insisting Alan use it when he hosts in April. When we have hosts use the same name two consecutive months that will be the official name. (Kind of like the kid in “A Thousands Clowns.”) The danger, of course, is that it will become sport to keep picking different names. 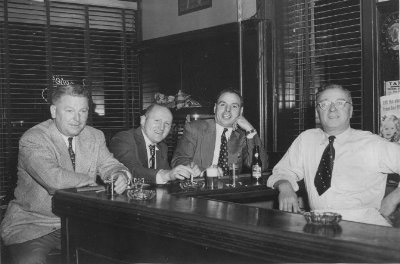 Yes, The Session. Unless I change my mind before Friday.

Jay Brooks added this comment yesterday to call the call for a beer blogging day. he was referring to an early round of e-mails where some of us discussed the logistics of doing this, including what it might be called.

For a name, what about:

Rick Lyke also suggested Firkin Friday. Literlalist that I can be I worried that implies you’d have to go out and find a beer on cask, or perhaps drink only English-inspired beers.

But although I’m hosting the first round, this is a group event with different hosts each month. So if you have an opinion about the name feel free to make a suggestions. I like several of Jay’s ideas.

The default name has been Beer Blogging Friday (Jon Abernathy thinks that is fine, BTW). 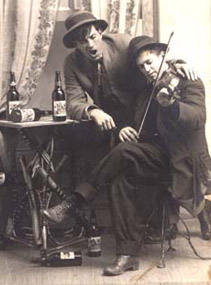 All the best ideas end up with beer.

It seems that beer bloggers around the world should have something similar. So let’s start one, an event that will occur on the first Friday of every month. It doesn’t have to have a name (yet) or a logo (like wine), just participants who want to have a little fun and don’t mind learning a little along the way.

Appellation Beer will host the first tasting March 2 (giving us time to get out the word), and the theme will be “Not your father’s Irish stout.”

There aren’t many rules. Simply pour yourself a stout (or stouts) and post on the topic March 2, looking ahead to St. Patrick’s Day or not and writing about any stout that isn’t Guinness, Murphy’s or Beamish (the Irish old guard – good beers but we’re writing about others). Should you worry about style? About getting the opinion of friends, about writing an official tasting note, about food? About the history of the beer or how its made? All optional.

After we do this a couple of months different bloggers will likely find different approaches we are comfortable with.

If you think you might participate please leave a comment or drop me an e-mail. Then invite a friend to participate too. After you post on March 2 send me the URL and I’ll write a wrap up with links to all the posts.

Alan McLeod of A Good Beer Blog will host the April gathering, announcing the theme shortly after March 2. If you have an idea for a monthly tasting, and particularly if you want to volunteer to be a host, send me an e-mail.