Oct. 1, 2019: Author Maureen Ogle has released a revised edition. “I didn’t update it,” she writes. “I revised it: Cleared the fluff, reorganized two chapters. Made the notes actual endnotes.” That’s the one you want to buy, with the cover that looks like the one pictured here. This release lays the groundwork for a new beer book she plans to publish in 2020. 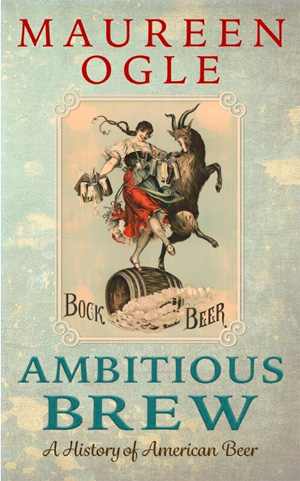 More than 10 years ago Mark Dorber, the venerable publican from London, told perhaps 30 beer enthusiasts who had gathered for a seminar prior to the first Real Ale Festival in Chicago, “The god of beer . . . is not consistency.”

Dorber might appreciate the new book Ambitious Brew: The Story of American Beer but he surely wouldn’t enjoy the underlying story told by Maureen Ogle. A historian by training — her previous books include All the Modern Conveniences: American Household Plumbing, 1840-1890 — Ogle explains in detail that is painful for thousands of American beer drinkers who think like Dorber just how America drifted into a beer monoculture in which homogenization in pursuit of consistency ruled and niche markets merited little attention.

The book would be more accurately subtitled “The Story of Industrial American Lager” — because it pretty much skips the first 200 years of ale history and doesn’t return to ale brewers until Ogle examines how microbreweries changed the American beer landscape just as dynamically as an earthquake might have.

Ogle’s story begins in the 1840s because that’s when beer surpassed spirits in popularity and an industry emerged. She tells a sometimes romantic tale of immigrants who successfully pursued the American Dream. (If you close your eyes you might see sepia-colored brewers toting bags of grain to a brewing kettle.)

How and why did they deliver us into a beer monoculture? Ogle makes it pretty straightforward: they developed beer suited to the American palate. Consumers were as complicit as brewers in the relentless march toward blander beer.

Did it have to happen that way? If brewery operators clung to the notion that every decision had to be based targeting a national audience and maximizing sales then it seems that way whether it was 1880 (“The men had no choice but to push their beer into distant markets”) or 1970 (when she writes brewers had “no choice” but to use additives because competition demanded lower prices).

The brewers who succeeded under these rules “recognized what is fundamental to any brewer’s success: the need for consistency. . . . so that each glass of their beer tasted the same every time.”

But consider this. She cites a report from The New York Times that “as long as the ‘greater part’ of the nation’s beer flowed down American gullets,the mostly German-born and bred brewers had no choice by the 1870s but to ‘modify the flavor of their beer to suit American palates’ rather than those of fellow immigrants.”

There are those words — no choice — again, but also the fact plenty of German customers were still drinking beer. Wouldn’t they have bought a traditional German product? For that matter, weren’t there English and particularly Irish immigrants who would have supported brewers of traditional ales like those sold in the United Kingdom?

As extensive endnotes and a massive bibliography indicate, Ogle was nothing if not thorough in her research. And she doesn’t have answers to those questions. It seems nobody collected, or at least saved, that information.

They are questions we ask today because even at a time that American industrial lager has become more like itself than ever before small-batch brewers in America have succeeded by catering to sometimes small niches.

Perhaps that’s why regulars in several Internet discussion groups — ones who would like the book to be called “The Rise and Fall of American Industrial Lager” — found Ogle’s account hard to swallow, and a variety of lively online discussions followed. It makes no sense to them that consumers would have embraced beer brewed with six-row barley malt (which they consider inferior) and adjuncts (mostly corn) rather than one with made traditional European (two-row) barley malt.

Yet Ogle documents time and again what happened to brewers who shipped beers with “too much barley” or ones that were too dark in color, and similar results weren’t acceptable for those who would become Beer Barons. The evidence it pretty overwhelming.

That she doesn’t vilify breweries who succeeded doesn’t mean she glorifies them. She documents business practices that certainly weren’t admirable and there is no better example of their imperfect vision than how they got broadsided by Prohibition — another subject covered in depth. 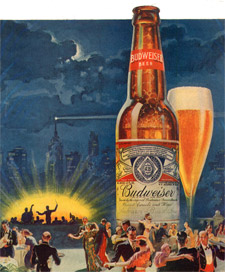 Not all of this is new to those who know American brewing history well, but the focus on the national brewers is different. Ogle offers a particularly telling comment from August A. Busch in 1920, shortly after Prohibition became national law. “We had to forget that we were brewers, bred in the bone and trained that way for years,” he told a reporter, a painful process that he likened to “Tearing trees up by the roots.” Once the people running the companies tossed aside their brewing roots was there ever any going back?

The drift toward beer with less flavor did not occur in a vacuum; by the 1950s flavor was out of favor. Ogle writes that drinkers asked for “an even less demanding version of American lager: a sexy vibrant beer that went down as easily as instant mashed potatoes or pudding and never asked much of its recipient.” Consumers were in charge, and the president of the Wahl-Henius Institute, a leading brewing school, told brewers they might prefer full-bodied, hoppy beers but they weren’t the ones buying the beer.

The trend never really stopped. Earlier this year the Wall Street Journal reported that from 1950 to 2004, the amount of malt used to brewed a barrel of beer in the United States declined by nearly 27 percent and the amount of hops in a barrel fell by more than a half. Some of this can be attributed to more efficient use of ingredients, but according to the Siebel Institute in Chicago the IBUs (a measure of bitterness) in industrial lagers have declined from between one-third and one-half in the last 20 years.

The Journal provided those numbers in a story that discussed flavor “creep,” in this case how Anheuser-Busch’s beer became less bitter over many years. “Through continuous feedback, listening to consumers, this is a change over 20, 30, 40 years,” said brewmaster Doug Muhleman. “Over time, there’s a drift.” Because A-B carefully preserves its beers, Muhleman could use a range of beers brewed between 1982 and 2003 to make his point. The WSJ reporter found the difference in taste between two beers brewed five years apart indistinguishable. Yet the difference between the 1982 beer and 2003 was distinct.

Imagine what would have occurred since 1870.

Ogle makes the ramifications clear in the last quarter of Ambitious Brew when she writes about the emergence of craft breweries and the mavericks who disrupted America’s beer monoculture. She recounts conversations we’ve never heard before and initiates new ones. Her affection for these brewers — understand that when she began she knew little about their beers — is apparent but doesn’t blur her historian’s vision. She makes it clear that craft brewers, like the immigrant entrepreneurs of the nineteenth century, are competing business operators and they don’t always talk like members of one big happy family.

Many might be happy buying the book for this thin slice of history, but would be silly to skip the first 257 pages. Industrial lagers still dominate in America although they no longer define American beer, and they frame many of the discussions the book has already produced. Eavesdropping on these sometimes spirited debates has been almost as entertaining as reading the book. They are just what a good history should provoke. 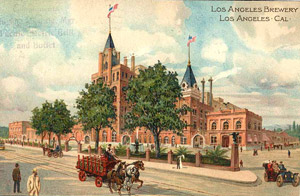 Friday the New York Times had a story about Ambitious Brew

and Saturday the Wall Street Journal chimed in with a review. Given that I’ve already posted a longish (three-part) interview with Ogle at Beer Therapy you might be tired of the subject.

That won’t keep me from writing an actual review of the book. For now though I want to share my “ah-ha” moment in reading the WSJ review (that sadly sit at a pay site). The Journal focuses on Prohibition, how it came about and how beer changed when it ended. Then Eric Felton concludes:

It was a taste that favored bland beer, and the brewers bowed to that public preference until the microbrewery revolution that got going in earnest about 20 years ago. Ms. Ogle tells that story with appreciation for the new school of brewers but without the snarky prejudice against the big corporate beer companies that is so common to today’s beer snobs. It is one of the virtues of her history of American beer that Ms. Ogle isn’t afraid to admit admiration for the bold risks and ambitions of the capitalists — then and now — who have made beer their business.