I prefer discussion about beer and wine, as opposed to beer versus wine. (And there is the matter of New Beer Rule #7: Beer is not the new wine.)

But “Why beer is the new wine, and wine the new fur coat” is so nicely written you should take the next six minutes (it is posted at Medium, that’s why I know long) to read it. Three sentences that might motivate you . . .

– Unlike wine, beer is subversive and lewd and witty.

– You know what the wine section looks like after you’ve strolled through the beer section? Like black-and-white TV after watching hi-res color video.

Go enjoy it. One reservation: I don’t consider wine an anachronism. Because the essay celebrates advances (I agree advance are good, just so you know) it would be easy to see some readers mentally substituting in “pale lager” for “wine” in the second excerpt. Pale lager is not an anachronism. So make that two reservations. Still a fun six minutes.

I’ve steered clear of the recent “wine-ification” of beer kerfuffle because I don’t have anything to say I haven’t already (New Beer Rule #7: Beer is not the new wine was written back in December of 2007, thus predating about half the breweries in the United States).

But today Mike Veseth, who I’ve mentioned here many times (including about his fine book, Wine Wars, and that he has another, Extreme Wine, on the way) asks the question: Is Craft Beer the Next Big Thing in Wine?

Remember the context and that the discussion revolves around economics. And it pretty much starts with an answer to the question he asks in the headline.

(Yes) — if you are thinking about things in terms of market spaces. The wine market space and that of craft beer are increasingly overlapping as craft beers infringe on wine’s turf (and low alcohol wines threaten to do the same for beer). And if the common battlefield isn’t huge at this point, it is certainly growing and warrants attention.

Much of it won’t appear new if you’ve been reading the beer compared to wine discussion for the past several years. But, you know, not everyone has. So it’s worth taking the time to move from Point A to Point B and so on with him. Words like innovation (“Innovation is a hot topic in the beverage business these days and craft beer presents more opportunities for innovation and product development than most wines if you are aiming at that market segment.”) and complexity are used. It’s interesting to read what somebody who does not live in the beer aisle has to write about beer.

So craft beer has a lot in common with wine and maybe a couple of advantages. With these products more widely available and a growing customer base that is ready and willing to experiment, I think it is plausible and wine and craft beer will increasingly share market space and must take that competition into account.

Something to think about.

And one quick side note:

At the end he suggests that some wineries might start to brew beer. Of course, that’s already happened. There are several wineries across the country who already do brew beer. Notably, in 1997 Korbel Champagne Cellars started Russian River Brewing in northern California and hired Vinnie Cilurzo as brewmaster. Six years later, Korbel decided to get out of the brewing business. Natalie and Vinnie Cilurzo bought the brand and started a brewpub, then a production brewery, in Santa Rosa. Do you think Korbel wishes it could take that decision back? 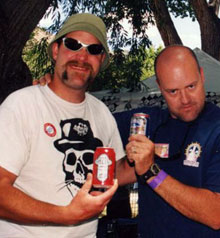 Last week’s “Where in the Beer World?” seems to have been a real stumper. My apologies. The facts behind the picture would make a rather long comment, so instead I’ll post the details here.

As a reader pointed out, that’s Bill Graham (Ska Brewing co-founder) on the left. Brian Lutz, the brewer at Oskar Blues when the then-brewpub began packaging Dale’s Pale Ale in cans, is on the right. The picture was taken in July of 2003 at the annual Colorado Brewers Rendezvous in Salida, Colorado.

Oskar Blues started canning on premise late in 2002 and Ska early in 2003. The brewers will release a collaboration beer in November. “It’s been a long time coming, doing something with those guys,” Ska co-founder Dave Thibodeau told Denver Westword. “We do a lot of outdoor activities with them, and we have been thinking we would brew something with them forever.”

Lutz left Oskar Blues a few years later, but recently returned to brewing in Boulder. He’s in charge of the kettles at West Flanders Brewing.

The Plot to Destroy America’s Beer. That headline for the cover story in the Bloomberg Businessweek gives you a good sense of where it is coming from. Not exactly pro AB InBev.

Time To Start Thinking About The Xmas Photo Contest. Alan McLeod writes, “I have to get my brain around the categories this year so that is an announcement for later.” While you wait, browsing at the Faces of Brewing should put you in the mood for more photos.

Craft beer is overtaking wine: SF mag. First notice I spotted about SanFrancisco magazine’s large spread on beer was in Dr. Vino’s wine blog, with the headline that sure gets some attention. Set aside a little time for all the stories (and, yes, the url is moderluxury.com), but start with with Dr. Vino to check out the comments about quality and price (both wine and beer).

A) Wine Enthusiast writer and noted blogger Steve Heimoff asks if a wine can have soul.

Perhaps it’s our more jaded, cautious age that does not permit me to do so, in quite that fashion. I find certain wines “fabulous,” “fantastic,” “stellar” and the like. But anthropomorphising wine isn’t my style. On the other hand, “soul” is just a word. I’ve enjoyed many wines that gave me such “a sensorial onslaught as to capture [my] complete and undivided attention.” Whether or not they had “soul,” I will leave to others to determine.

I wouldn’t call soul just a word. Quite honestly, more than six years after I added the tagline “In search of the soul of beer” here I’m still looking and occasionally wondering just what that means. But there’s more to it than trying to find “stellar” beer.

B) If you’ll recall, I’m a fan of Wine Wars, in large part because the book takes the “sideways” view. Author Mike Veseth has announced his next book will be called Extreme Wine (Honest to goodness, I typed beer right after extreme; pure force of habit.)

Where Wine Wars probed the center of the world wine market, Extreme Wines focuses on edges based on the same theory that wine lovers use when they tilt their glasses “sideways” and analyze the liquid’s rim: the forces of change first make themselves visible at the outer limits.

This, of course, is good reason to consider the role of extreme beer. In fact, this table of contents is just waiting for somebody to replace the word wine with beer. And maybe throw in the words barrel-aged, Brettanomyces and hops.

1. X-Wines: In Vino Veritas?
2. Extreme Wine: Best and the Worst
3. The Fame Game: Most Famous, Most Forgotten and Most Infamous
4. Sold Out: Rarest, Most Unusual and Most Ubiquitous
5. Money Wine: Cheapest, Most Expensive and Most Overpriced
6. Extreme Wine Booms and Busts
7. Extreme Wine People
8. Fifteen Minutes: Celebrity Wine
9. [The Medium is the] Message in a Bottle: Television, Film and the Web
10. Around the World in 80 Wines: Extreme Wine Tourism
11. Extreme Wine by the Numbers
12. Tasting Notes from the Edge

You have any idea how many books Oxford University Press published in its “companion” series before it got around to beer?

Most of the books that are part of the franchise must have been more popular when they were new, because it appears these days that beyond the top two on the list none of them outperforms the 100th best selling beer entry (Clone Brews, at this moment) on Amazon.

Those top two, of course, are the shiny, new The Oxford Companion to Beer and the third edition to The Companion to Wine, still selling briskly five years after it was published. I think we all expect the Beer Companion will have the same sort of legs, but that’s a topic for another day.

I own the wine book and recall the excitement within the wine blogosphere when it was released in 2006 (plus that Costco stocked a bunch as a price that beat Amazon). I occasionally hoist it off the shelf — either when I have a particular question or feel in need of exercise, given that it weighs half again as much as the hefty beer book — and I never think to question what I find. I certainly don’t remember it being scrutinized the same way as the Beer Companion.1

So I asked a few wine bloggers if I missed something. Mike Veseth, author of Wine Wars, wrote back:

I cannot remember any sharp criticisms when the Oxford Companion to Wine appeared. Certainly the release of the current edition was celebrated, not criticized. I suspect that this is because the OCW project is well established and has set the standard for comprehensive wine books.

I asked Jancis Robinson (editor of OCW) what she thought and she replied that, while there were no harsh critiques when the OCW was first released in 1994, she thinks there would be some today just because the times are different — more bloggers and social media forums where opinions are shared.

Yep, the Netscape browser was brand new in 1994 and Amazon didn’t exist. Nor did Rate Beer or Beer Advocate or any of the blogs on the right. But I’m still trying to figure out if that explains the all that has already been written about the Beer Companion.

Are the errors that grievous? Is it that those who really care about beer (and the facts related to beer) care than much more? Is beer (and beer history) that complicated, subjective to interpretation, lost in the ether?

As I was typing this post Alan McLeod added Garrett Oliver’s comments to OCBeerCommentary, and then Simon Johnson’s thoughtful conclusions popped up in my feed reader. (Yes, two Simon Johnson links inside of a week; no more, I promise.)

Go read them, because so far I’m long questions and short answers.

1 OCBeerCommentary provides both links to what has been written about the Beer Companion (see “general comments”) and comments that generally identify errata.