A couple of weeks ago at Good Beer Hunting, a story about the Tyranny of the Tickers and the pressure Untappd ratings exert on how beer is made and sold included was a reminder of the mini-empire that a company called Next Glass is building.

Head to its website to see it is parent to Untappd, BeerAdvocate, Hop Culture, and Oznr. So “next glass,” that sort of makes sense. Those apps and sites can help you with that. But had you visited the website six years ago you would have seen this.

Next Glass 1.0, circa 2015, was something different. It was one of several drink recommendation apps that came and went about that time. Some got tagged as the “Pandora for beer.” For First Glass, that made sense because it took a scientific approach similar to Pandora when collecting data. Others were more like Spotify, that is using collaborative filtering. Netflix and Amazon are the best known services using that technology, which is based on the assumption that if two users enjoy overlapping sets of movies or books their tastes are probably similar.

In contrast, feature-based systems begin by measuring specific attributes of songs (or beers). Pandora created the Music Genome Project and employs musicians to catalog key elements of every song in its database.

Next Glass mapped the chemical makeup of individual beers, forgoing any effort to quantify a beer based on its descriptive characteristics. The app used an algorithm to blend the attributes of the beer in question with what it knew about each consumer and assigned a number predicting how much the consumer would like that beer.

To use the app, consumers scanned a label or searched for the name of a beer. The app returned a number that predicted how much (with a theoretical best score of 100) you would like it. The number was a result of algorithm and blended the attributes of the beer in question with what it knew about the consumer in question.

“The only way to do this is science,” chief operating officer Trace Smith said at the time. The Pandora influence on Next Glass was obvious, its Music Genome Project mirrored by the “genome cellar” at Next Glass. In addition, Smith said, his company talked with scientists at Pandora in “granular detail.”

Next Glass streamlined its evaluation process by using a liquid chromatography mass spectrometer (“mass spec”) to isolate 22,000-plus chemical attributes in a wine or beer during a four-to-five minute scan. “We can run 25 minutes and get more than a hundred thousand, but we can make incredibly accurate predictions with less,” Smith said.

Because I was writing a story for All About Beer (RIP), Next Glass ran a couple of comparisons to use as examples, which I remembered to look for when Next Glass and Smith popped up at Good Beer Hunting. They provide some fun comparisons. 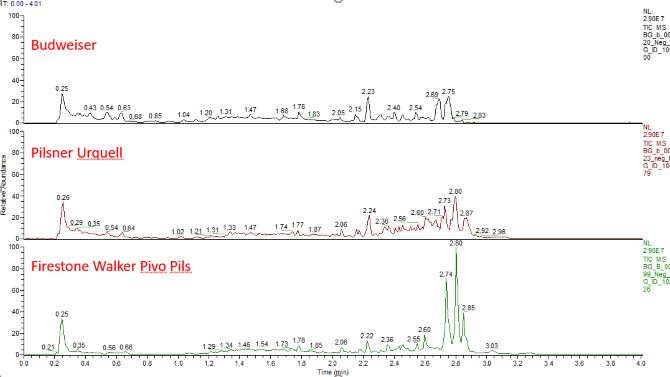 The mass spec not only measures the presence of particular molecules, but also the abundance of each one. This first chromatogram graphically depicts the difference between three pale lagers. The third peak in the 2.7 to 2.9 range is the key one for identifying what most drinkers would describe as hoppy. “If you look at the peak at 2.85 for Pivo Pils and then look at that same area on Pilsner Urquell and Budweiser, you’ll see that Pilsner Urquell has less than Pivo, but that it’s basically non-existent for Budweiser,” Smith said. “The other thing that may be worth noting is that the chemical levels don’t necessarily translate to taste perception on a one-to-one level. In other words, something having twice as much of one compound will not necessarily be perceived by one’s taste buds to have twice as much.

“. . . we’re not really attempting to quantify each beer in terms of its descriptive attributes. We can look into what roughly translates to which taste perception for an exercise like this, but we’re trying to let the algorithms and data do the work. We don’t need to know what translates to what to make good recommendations. The machine learning algorithm sorts all of that out on an individual level for each user.” 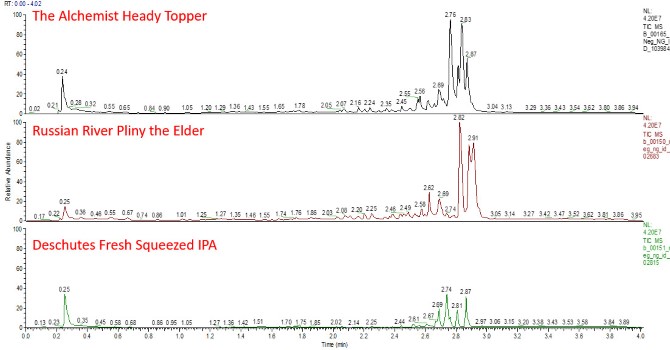 The same area in this chart illustrates the dramatic difference between two Double IPAs and an IPA one that was at the forefront of the not-so-bitter trend in 2015. What’s not obvious is how Pliny the Elder differs, because there is a particular compound, which a Next Glass chemist could see on the mass spec although it isn’t obvious on chromatogram and that she spotted in Pliny but not in Heady or Fresh Squeezed. “Based on that, I would say that scores for Heady and Pliny would be different for users for which that compound was an important factor for enjoyment,” she explained.

There’s more than one reason the app is long gone. Next Glass grabbed considerable media attention in the fall of 2014 by conducting a “beer census,” traveling around the country to collect bottles. The app was downloaded 260,000 times in the first six weeks and users rated 3.5 million wines and beers. But the company was never going to be able to collect mass spec information on the thousands of new beers released every week.

Equally important, compounds are different than aroma, because smell becomes aroma when it is processed by our brains. You and I don’t necessarily share the exact same 350 (or so) odor receptors. “You end up with a barcode situation, whereby each individual has a slightly different barcode,” according to geneticist Doron Lancet of Israel’s Weizman Institute of Science.

Further listening: A timely podcast from Vox. No one nose: Believe it or not, scientists still don’t know how the sense of smell works. But they’re looking at how powerful it is – dogs can actually sniff out cancer and many other diseases – and they’re trying to figure out how to reverse engineer it. In fact, one MIT scientist may have built a robot nose … without completely understanding how his invention works.