By Stan Hieronymus on October 24, 2019 in beers of conviction

Boak and Bailey provoked what turned into a longread last week by asking “What’s the reference beer for each style? Especially more obscure styles, we suppose.” @BoakandBailey quickly added, “So, to clarify: reference doesn’t necessarily mean the best, just the most representative. If you’d never had style X before, would that beer help you understand it?”

Start at the top, keep scrolling, take your time, feel free to wander off into some of conversations within the conversation. I’ll wait.

At the end, @joelandrewwinn writes, “Curious to see the responses when North America wakes up tomorrow. My guess is there will be opinions.” If comments broke out, I didn’t find them. That doesn’t matter. This isn’t about the best American reference for a mild (although Rocksteady on cask at Good Word Brewing in Duluth, Ga., was awfully good Saturday before last). Or a reference for Americanized or “traditional” German pilsner, or pastry stout or whatever.

END_OF_DOCUMENT_TOKEN_TO_BE_REPLACED

By Stan Hieronymus on February 1, 2013 in the session

– Robert Earl Keen, “Love’s a Word I Never Throw Around”

For the 72nd gathering of The Session host Ryan Newhouse asks contributors write about “How We Love Beer.” The key word, he points out, is how. “I’m not looking for what characteristics beer has that makes us love it, but what we do to show our love for it.”

One of my personal rules when I write about anything is to question everything, including myself. In this case the question is: Do I write about beer, in this space and elsewhere, because I have a taste for it, because I’m addicted to collecting stories and retelling them, or because writing about beer is my primary source of income?

The answer is B and C, but of course there is another question. One I continue to consider more than five years after Michael Jackson wrote this mysterious paragraph, at least mysterious to me, in a column that appeared in All About Beer magazine after he died.

Being a critic is one of the things I do for a living. Being a reporter is another. Is a reporter a fearless seeker-out of truth, neutral and objective? Or does he recruit those qualities in support of his personal passions? When I enlisted, at the age of sixteen, I may have been attracted by the powerful purity of the first role. In the event, I grew into the second.

I would have liked to have asked him just what he meant there, about the reporter part, not the critic part. Not that I would necessarily have agreed with him, but because it seems to me thinking about such matters may result in better beer writing. And although showing a little love for beer in general is not my primary goal in improving how I write about the topic, it’s probably a side effect.

Enough about me. Tomorrow it’s back to writing about beer, maybe Clydesdales and Budweiser Black Crown, or perhaps how the distortion of the essential oil composition during isolation by steam distillation can significantly interfere with hop analysis and cause imprecise quantification of key compounds. I might be kidding.

By Stan Hieronymus on December 23, 2009 in beers of conviction

In the course of six revisions after his first Pocket Guide to Beer Michael Jackson elevated (and sometimes later demoted) only 20 beers to “world classic” status. He didn’t use the term casually.

As Alan fairly points out this was the opinion of but one man. One more qualified to comment than any, but just a important one who gave us an “exploration to follow.”

. (He wrote the introduction a few months before he died in 2007; the book came out a few months after his death.)

“Today, neither European brewers nor most drinkers on either side of the Atlantic have yet grasped that tomorrow’s most exciting styles of beers will be American in conception.”

“The nation that makes the world’s lightest-tasting beers also produces the most assertive beers. Tomorrow’s classics will evolve from a new breed of American brewers that are categorized by their admirers as ‘Extreme Beers.’ These are the most intense-tasting beers every produced anywhere in the world. They include classic European-style stouts that are richer, toastier, and roastier than anything yet produced in Ireland; ales massively more bitterly appetizing than any in Britain; ‘wild’ beers more sharply, quenchingly sour than their Belgian counterparts; wheat beers so spicily phenolic as to make a Bavarian choke on his mid-morning weisswurst; and pilsners so aromatic as to tempt the Good Soldier Schweik — the eponymous hero of Jaroslave Hasek’s comic novel.

“Sometimes the new US beers combine elements from more than one style, but with a view to achieving greater distinctiveness rather than to merge into blandness. The best example I ever experienced was the Smoked Porter of the Alaskan Brewing Company.”

Quite obviously he was not done exploring beer or celebrating the new. He didn’t find appreciating both “extreme” and “traditional” beers a contradiction.

You know, I think I’ll leave it at that rather than starting a conversation about what individual beers he would have given four stars.

By Stan Hieronymus on April 26, 2009 in beers of conviction, musing

After touring the Pilsner Urquell brewery last November I promised that when I got a chance I’d take a look at Michael Jackson’s video report from 1989 (the Beer Hunter series) to compare what he saw then with what Pilsner Urquell says is how long they’ve “always” lagered beer. 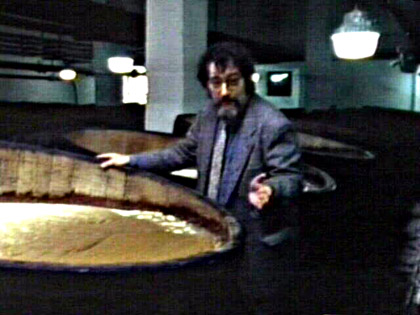 I tell you, that’s one great half hour of video. Discovery really needs to reissue the three hours of video in DVD form (before our VCR dies). Incredible details about the wooden vessels the brewery was using, the coopering, the whole process. I love watching Jackson wander through the caves, and the Hitchcockian moment where a giant barrel appears to be stalking him. You get thirsty seeing him march around open wooden fermenters, then he climbs a ladder to loom over one and explain that this is one of the things that make Pilsner Urquell different, presumably better. He says that others in the industry have told the brewery it is crazy not to modernize but that its leaders swear they won’t abandon open fermentation. Sigh.

But back to the question at hand. These days Pilsner Urquell lagers its beers five weeks, claiming this is the same amount of time as when Josef Groll first brewed the beer in 1842. On the other hand, the Beer Hunter report in 1989? “Three months,” which on my calendar is one quarter of a year (13 weeks).

Those were the most popular search terms that brought readers here in 2007. Looking at lists of the best read posts at several blogs I read got me poking around the stats at Appellation Beer, to see what you were reading and to try to guess why.

I was surprised this final post of the year will be the 299th, more than double 2006 and a lot more than I expect in 2008. An explanation about why week after next, when we’re back from an Internetless shakeout cruise that’s practice for a trip we expect to occupy much of 2008 and 2009.

Anyway, I won’t be finishing 2007 with a list of “top beer stories” (we already know the biggest one is also the one that still makes us terribly sad). I do recommend Don Russell’s look back with some make-you-smile predictions.

And I can tell you that the search terms that are trending up are Firestone, beer sommelier and Michelada.

Make of that what you will, as well as this list of the best read stories here during 2007:

See you next week in time for The Session #11.