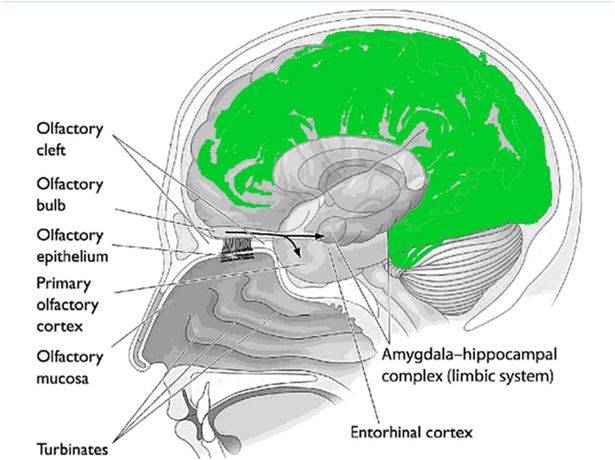 This is your brain on hops. I have no idea what a mouse’s brain would look like.

Welcome to my biannual reminder that less may be more, in this case referring to compounds that create beer aroma.

Some basics
Olfactory receptors are buried in the two patches of yellowish mucous membrane called the olfactory epithelium. Humans have about 20 million receptors, covering the epithelium of both our right and left nostrils. The first stop a collection of molecules otherwise known as an odor makes on the way to the brain, and to being identified as a particular aroma, is in the receptors. Once activated, neurons transmit signals to the olfactory bulb of the brain, which relays those signals to the olfactory cortex. Olfactory information is sent from there to a number of other brain areas, including higher cortical areas thought to be involved in odor discrimination and deep limbic areas. Odor sensation becomes olfactory perception.

How the brain translates odor compounds into aroma is complicated. Linda Buck and Richard Axel were awarded the Nobel Prize for Physiology or Medicine only in 2004 for their discoveries — an indication of how long it took scientists to crack the code.

What’s new
Researchers at Kyushu University found that the olfactory sensory neurons can exhibit suppression or enhancement of response when odors are mixed, meaning that perception is not the simple sum of the odors.

In their experiments, mice that were genetically modified to have their neurons emit green light depending on the amount of calcium ions in them — an indicator of activity — upon absorption of excitation light, the researchers were able to record the response of the neurons in the mice’s noses.

“It has been previously considered that each odor ‘activates’ a specific set of receptors, and that the response of neurons in the nose to odor mixtures is a simple sum of the responses to each component, but now we have evidence in mice that this is not the case,” said Shigenori Inagaki, the lead author of a paper published in Cell Reports.

The team headed by Takeshi Imai found that odors could not only activate but also suppress the response of the neurons before the signals reach the olfactory bulb or brain for additional processing. They determined that mixing odors often leads to an enhancement of response through synergy or a suppression of response through antagonism.

“Possibly, these findings may explain how the addition of a minor amount of an odor can have such a major effect on the perceived fragrance, or how different kinds of odor molecules in a glass of wine produce a nice harmony,” Imai said.

Covid neither neighborhood nor innovation friendly

One Response to Public service announcement for DDH fiends: Less may still be more