By Stan Hieronymus on August 5, 2019 in monday links

1) Our idea of luxury has changed dramatically over the last 15 years.
It begins: “Look around. We live in the age of gilded minimalism. In the Bay Area in the year 2019, pop-ups in unmarked buildings draw hours-long lines. Our hottest restaurants are spare, open temples to natural light. We want our butter house-cultured, our grains ancient, our wild ales spontaneously fermented — and we’re happy to pay the premium markup.” The premise is that 2004 was a pivotal year for California wine. What would the pivotal year for American beer be? 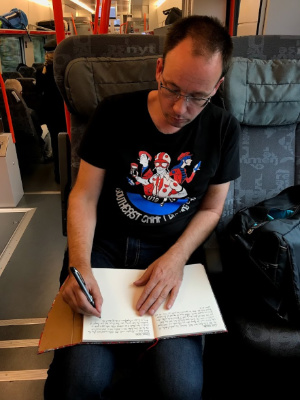 A Fire Being Kindled — The Revolutionary Story of Kveik, Norway’s Extraordinary Farmhouse Yeast.
Everything you wanted to know about kveik but were afraid to ask. Also an excuse to remind you that Lars Garshol (on the left, riding the train back to Bergen after a day of research) will be talking about kveik and Norwegian farmhouse brewing next month in Chicago and Toronto.

4) Good or shite?
Tandleman offers up a blast from the past.

5) Jarl vs. Citra – clipping in the treble?
Thinking about beer in terms of sound.

6) The Most Important Beers in Minnesota History: A 12-pack of taste and influence.
7) We Asked 20 Brewers: What Are the Worst Trends in Beer Right Now?
6) is thoughtful, and almost, but only almost, makes me wish I weren’t so unkind to listicles. Not sure you’d call everything listed in 7) a trend, but the topics led to a bunch of chatter on Twitter.

8) The Secret Life Of Yeasts: Spontaneous Fermentation In Wine.

9) How Distillers Use Yeast to Influence Character in Spirits.

I think it’s interesting that this ad is 1. very confidently directed at women 2. in a mundane context very familiar to women 3. seemingly without the normal assumed audience/gaze of men.

Very in to this. https://t.co/gCVg88dMyA