By Stan Hieronymus on August 10, 2020 in beers of conviction

Last week, Evan Rail tweeted a link to a New York Times story about “The Twilight of the Imperial Chef.”

We’ve been saying the same thing about craft beer for years.

In our culture we have a tendency to elevate & make heroes of individuals.

But our favorite breweries include more folks than just Sam, Garrett, Tomme, Evin or Yvan. (And look: you know which breweries I mean.)

These are teams. Groups. Real people. Let’s do right by them.”

Consider how Tejal Rao sets the table in the Times story:

For decades, the chef has been cast as the star at the center of the kitchen. In the same way the auteur theory in film frames the director as the author of a movie’s creative vision, the chef has been considered entirely responsible for the restaurant’s success. Everyone else — line cooks, servers, dishwashers, even diners — is background, there to support that vision.”

This is one of several stories recently about “monsters in the kitchen.” I don’t think anybody is suggesting that is going on within breweries. (On the restaurant side of brewery operations, that might be another matter.)

So back to Rail’s point. Five years ago, All About Beer magazine published mini-profiles of nineteen “unsung brewers.” The introduction explained, “In the modern brewing industry, especially in the United States, there are celebrity brewers. Known by their first names, fans line up at festivals for pictures and a pour from the likes of Sam, Jim, Garrett, Vinnie, Ken, Matt and more. For every one of these well-known names, there are dozens more operating behind the scenes, making flavorful, conceptual beers of exceptional quality, albeit without the same level of recognition.”

Many of those featured were brewery founders or otherwise brewers who had risen to an administrative role. Two who were not were “shift” brewers I wrote about who have in the years since become something else. Jared Williamson’s title at Schlafly Beer in St. Louis is now “lead brewer.” Jonathan Moxey left Perennial Artisan Ales for Rockwell Beer Co. (both in St. Louis), where he is the head brewer. 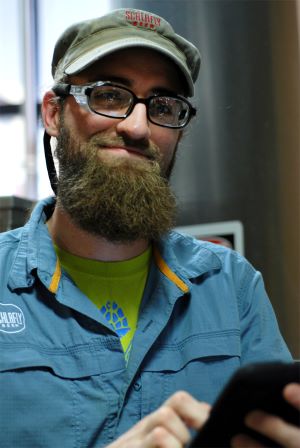 @Jaredbrewsbass does not use Twitter to glamorize the brewing profession, for instance tweeting, “Make wort, CIP, repeat. #brewerylife,” and, “Even when it feels like 100 degrees outside, I get to wear pants to work, and boil sugar water. #blessed,” earlier this year. Nor does he appear to be angling for a job in marketing when he writes, “Brewing the #moneyjuice, for it pays the bills. Back on the close shift, which means the #NightBrewer returns. @radiohead serenades, softly.”

“I have Twitter buddies around the world I’ll probably never meet,” says Jared Williamson, who tweets mostly about his job at Saint Louis Brewery, but also about soccer or playing the upright bass (thus @Jaredbrewsbass, and why he has to explain he does not brew Bass Ale, which is made at a larger brewery in St. Louis). Williamson is most senior of the brewers who rotate through three shifts at Schlafly Bottleworks, its production facility.

“When you brew 1,000 barrels a week, it could be easy to lose sight of your original passion for beer,” he says. Instead he scratches the creative itch that draws many brewers into the trade by focusing on productivity and quality. “You find five minutes here, 10 there,” he says, describing why Schlafly can now brew nine batches in the time it took to brew eight when he started in 2011.

In reality, few days are like the one before. Witness Feb. 2: “It is a happy day, 1st batches of 2015 @Schlafly AIPA are cruising through the brewhouse. Like apple pie, freedom, and unicorns. #AIPAtruth.” 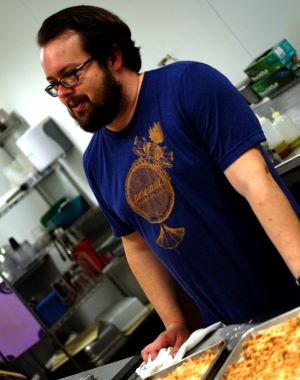 The month before, Jonathan Moxey had flown from St. Louis to Seattle and Chicago to represent Perennial Artisan Ales at beer week events in those two cities. “Going out and eating good food on an expense account and talking about beer,” he says. “Yeah, that’s a good day at the office.” But not a typical one for him.

This morning he was the first to arrive at the brewery, slipping on his brewing boots at 6 a.m. “I’m in the cellar today. All of us are utility players. We do everything,” he says. He takes a sponge from a bucket of sanitizer and carefully wipes down the inside of a fermentation tank manway door while he describes a beer he started the day before in the brewhouse.

He was a writer at Standard & Poor’s in Manhattan when he discovered it was possible to make quality beer at home. A Missouri native, he knew almost immediately that when he and his wife, Lauren, returned to the Midwest, he wanted to work for a brewery. This is the only professional brewing job he has had, but he’s figured out he’s not interested in working at some place much larger, at least larger than Perennial seems bound to be.

“This is all part of it,” he says, gesturing to a hose neatly coiled at his feet, grabbing one end, hooking it up to piping from a kettle in the brewery upstairs. “It’s integral, one step in creating a beer nobody has ever tasted.”

The future of beer
Where have all the bitter beers gone? Gone to hazies everyone